Every Neighbourhood Needs an Akhada

In the summer of 2012, we entered the village of Tigra, Gurgaon India, to work with village inhabitants to rethink the nature and use of public space. What unfolded was a series of triggers that catalyzed a building of relations and solidarity between inhabitants as a social momentum for direct action.
Through a narration of this series of events, we present the formula from which the akhada was created; an undetermined process centered on an enabling of collective recognition of their potential for self-organization. The essay narrates the tools and techniques of the process as insight into how collective vision and capacity is enabled, and into the role artists, designers, anthropologists and citizens can assume in restoring healthy community relations, capacity and ultimately life in today’s cities. 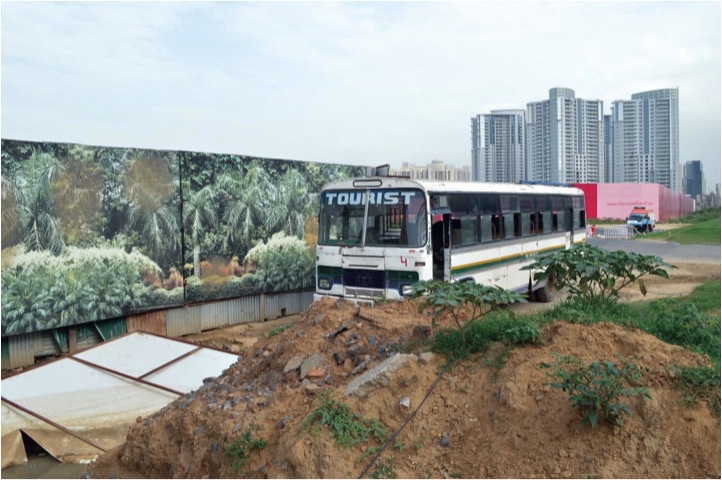 Over the last decade, private developers and market forces have been fabricating a city in the farm suburb of Gurgaon. Through the economic liberalisation of Gurgaon’s land and ripe real estate demand, fertile agricultural land has given way to commercial and residential complexes through a speculative process of land selling, buying and transformation. In just five years time the Millennium City has risen; shopping malls, golf courses, luxury shops, gated housing complexes and a new population of workers and residents on land that had been home to wheat, mustard seed, barley and sugarcane for hundreds of years.

Caption: A tourist bus parked against a wall of fake foliage enclosing one of Gurgaon’s many golf courses; in the background the familiar sight of a highrise apartment complex 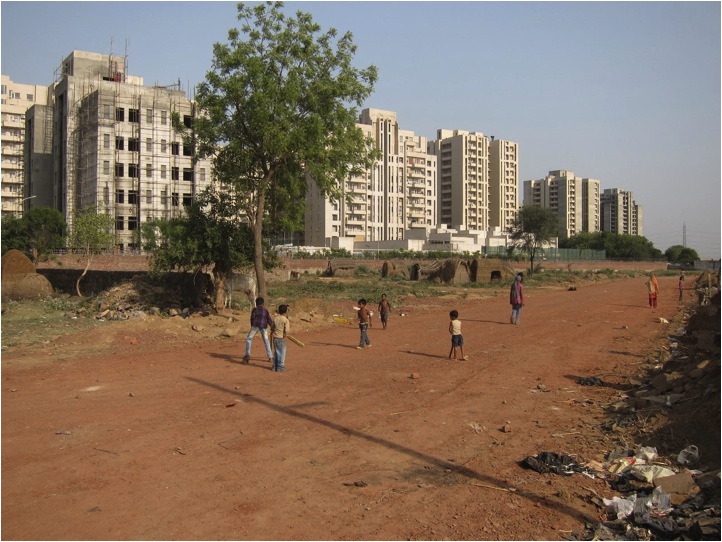 Framing Text: The Gurgaon model of development is serving as “the way forward” and being copied elsewhere, but individuals and groups are already questioning the Millennium City’s viability beyond the short-term boom; specifically its environmental, social and cultural sustainability. As more people move into Gurgaon, friction between increasingly disparate socio-economic classes and cultures is becoming more and more evident, and perpetuated through increasing exclusivity and privatisation of land. There is a growing need for common grounds that can help create and establish collective social life and integrate inhabitants into citizens, active and at home in this emerging City.

Caption: A group of young boys play Cricket on a road that functions as common land. 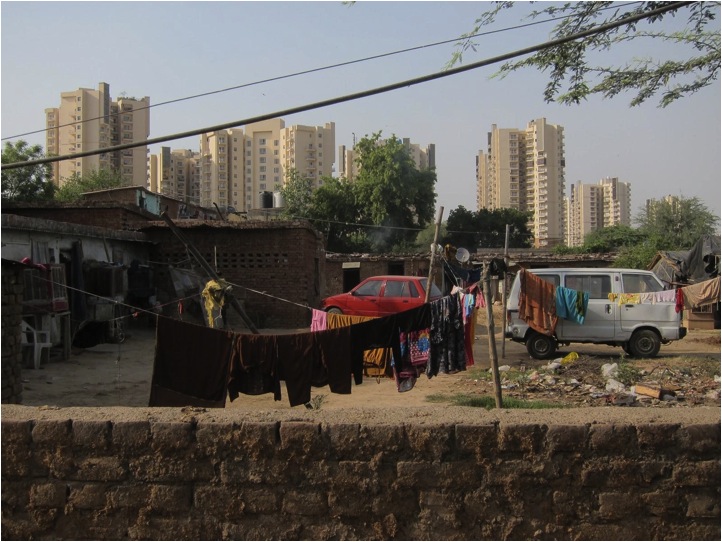 Agricultural land belonging to the village of Tigra and it’s residents was acquired by the government or sold to private developers about 20 years ago. The village that remains is still segregated based on caste, with areas designated for Gujjar, Brahmins and Harijan communities. Many residents maintain rural livelihoods, farming on land now several miles away, or herding cattle for their milk. An area of the village is designated as lal dora land, following a century old law that exempts this portion of the village from building bye-laws or construction regulations otherwise governing urban development. Today migrants from across the country, working in Gurgaon’s highrises, rent out tenements built on the lal dora land. 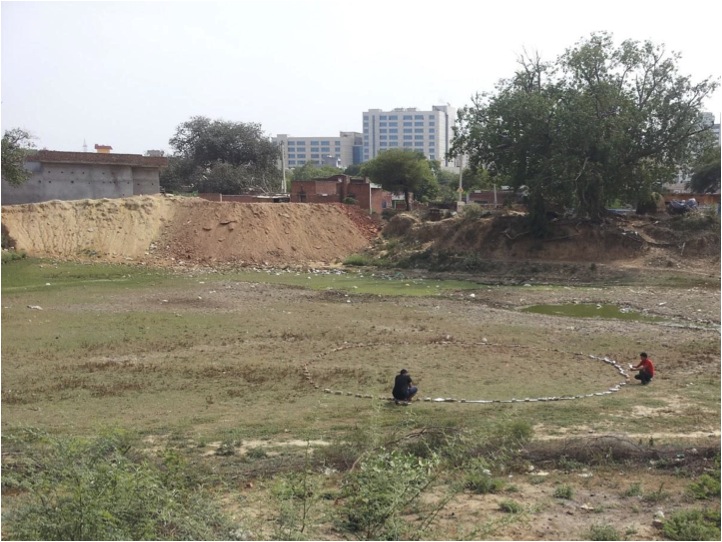 At the center of Tigra, is the seasonal Baba Ram Mohan Johar, believed to be sacred for its water. Deterioration of channels that brought water into the lake during the monsoon, has resulted in the drying up of the lake, and a subsequent drop in the groundwater levels of the surrounding area. Parts of the lake have been reclaimed as land for the construction of a supposed ‘community center’ building. Some believe what is left of the lake should be used as grazing land for cattle, others believe that it should be converted into a park for children, some imagine on it an old age home, some believe it should be restored to it’s seasonal glory, and yet others would like to see it as a parking lot for the community center.

Caption: Bricks from the construction of the supposed community center (back left) built on the southern tip of the lake land, are painted and repurposed as a circular formation in the center of the lake. 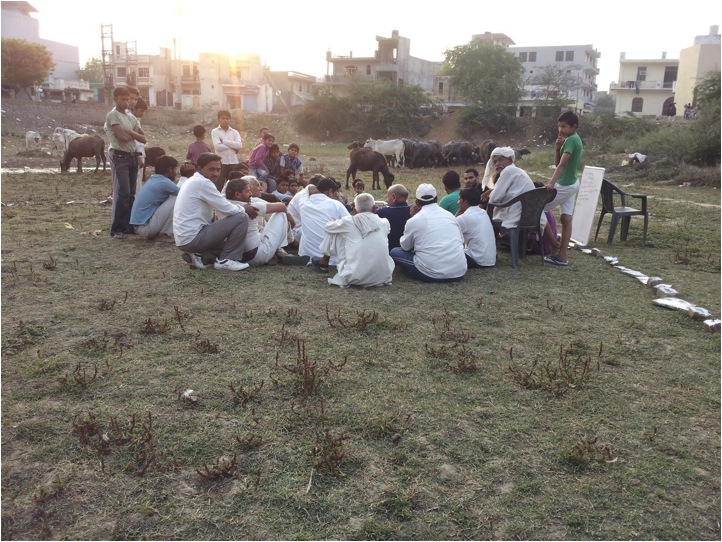 Caption: On invitation, Tigra residents gather together on the lake bed to discuss it’s possible futures. 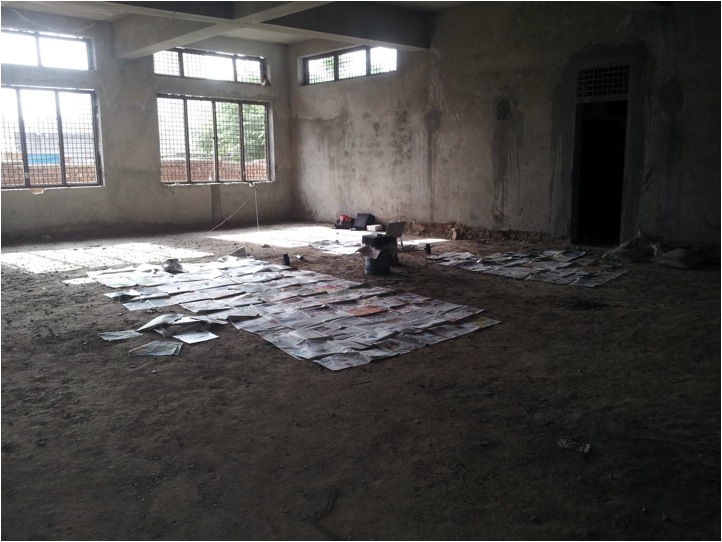 Video narratives of residents’ memories and wishes for the lake were strung together into a movie and played back to the community as a way to incite residents’ collective consciousness and responsibility for the future of the Baba Ram Mohan Johar. Amongst the memories were stories of the lakes 7 generations of history; stories of people travelling from afar for its sacredness, children speaking on how they play there and women speaking on how the lake is now punishing the village for its degradation - “the lake, the house of God, was beautiful, but now it is doomed. Not because of the water but because of this wayward world and its bad deeds. And the village can not find happiness”.

Caption: A projector, laptop and speaker system are set-up, and newspapers are laid out as create seating space, converting the nto a temporary film screening hall. 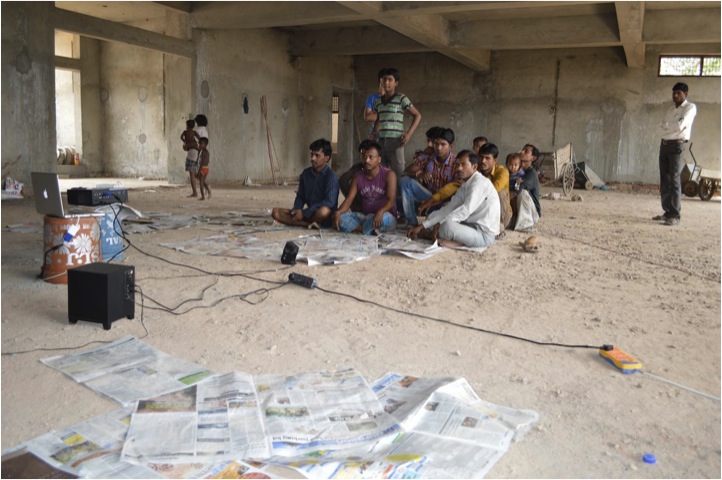 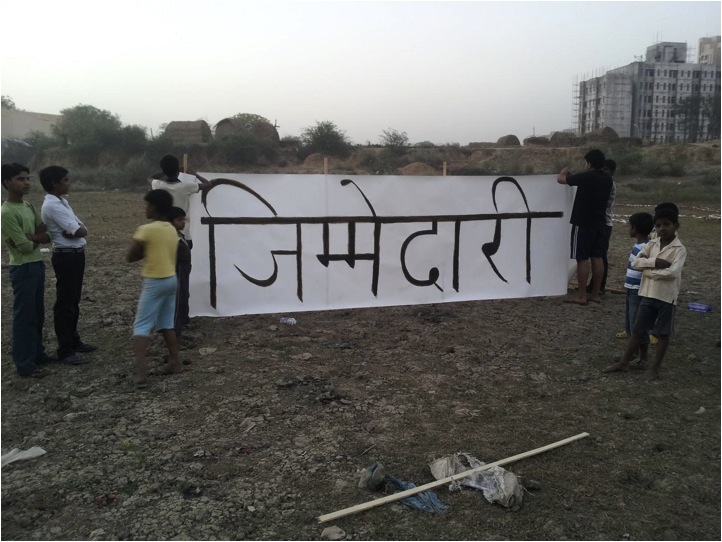 A play on words posing a provocative question on land ownership, was painted on paper and staked into the lake for people’s open interpretation. Accompanying the words was land art repurposing the lake into an open contemplative space for reconsideration of the lake’s human functions and importance; a cow grazing as valuation of the lake’s role as a grazing ground and bathing area for the dairy producing cows and buffalos that 60% of the village own, a swastika, representative of the lake as a holy place for pilgrimage and the swastika’s mantra meaning - doing good, and a rain cloud indicative of the reservoir’s role as a groundwater recharger via monsoon rainwater collection.

Caption: The words zameendari zimmedari, translated roughly into land ownership & responsibility in Hindi, laid out as inquiry into civic values in a Gurgaon landscape of growing challenges to water, land management, ecology and public space. 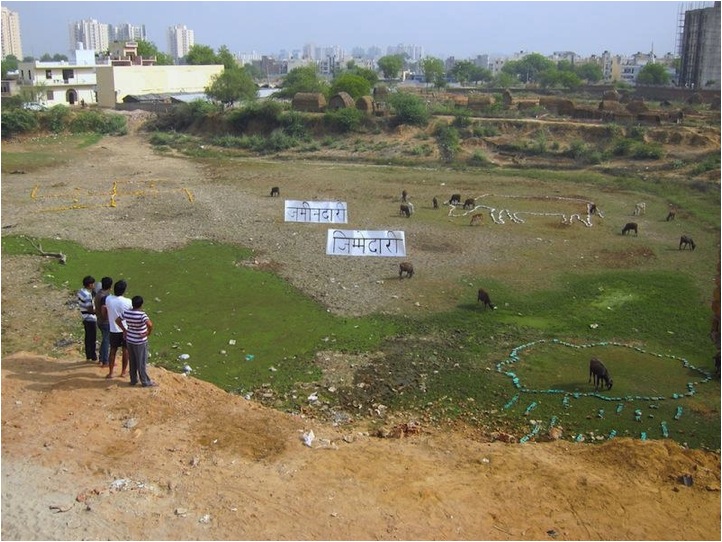 Caption: Residents contemplate Zameendari Zimmedari, a swastika, grazing cow, and rainwater as interpretive land art melded into the basin of the lake 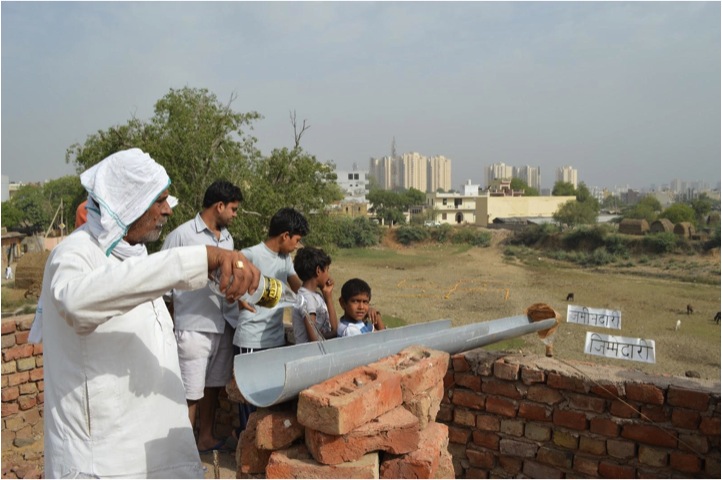 The roof of the community center served not only as a viewing gallery for the land art, but also a space for continuing dialogue on the revitalization of the lake. A groundwater collection installation was created to experience how water from rooftops across the village could be channeled into the lake. Groups were taken to the roof to consider this installation that carried mock rainwater through tubes, out into the lake. While envisioning how to best secure the lake’s future and ward off encroachment was our objective, the actual conversation that occurred was one of the politics, power structures, and class divisions that rule and obstruct the village from progressing.

Caption: A village elder pours water into a pipe that channels water from the rooftop into the lake. 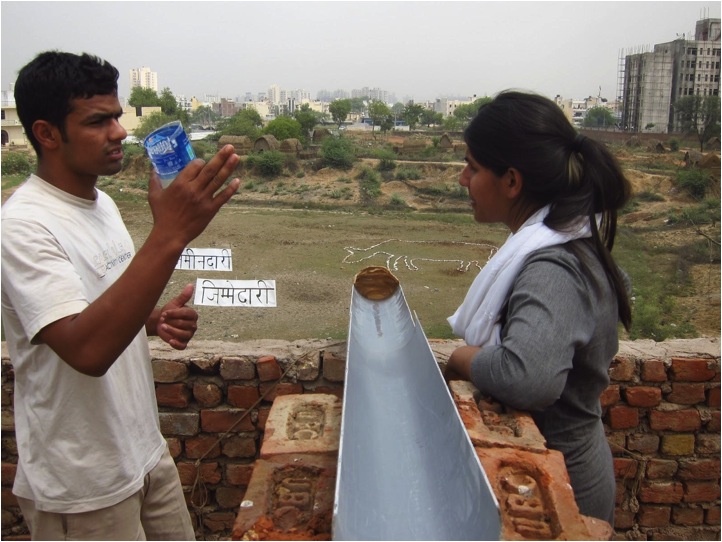 Caption: Deepak, a young wrestler and resident of Tigra, interacts with us through the day. 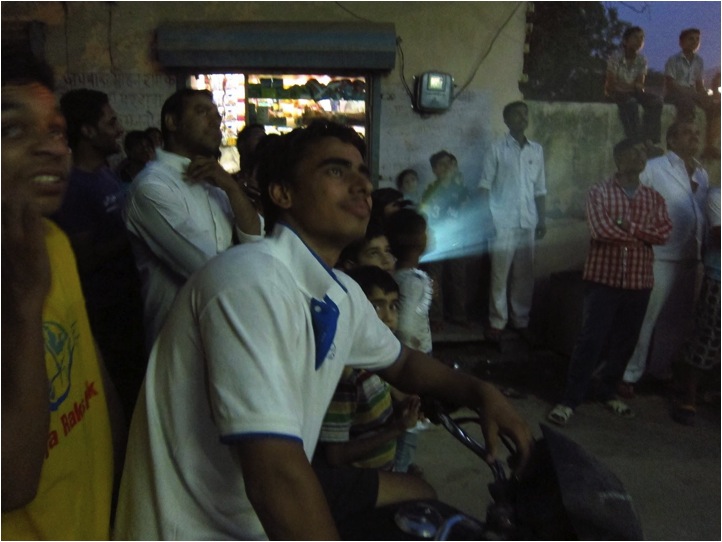 In the evening, discussion was mobilized and continued following another projection of the film on a street corner easily accessible to residents. The experience of projected opinion, sentiment and expression built conditions for an open forum for heated dialogue, critique and fervor. This marked the conclusion of the chain of events we facilitated for residents, and visibly resulted in the enabling of Deepak and an agency of young adults to self-organize and bring to life a longstanding idea for the community; an akhada.

Caption: Residents take in a projection of narrated personal recollections of the Baba Ram Mohan Johar 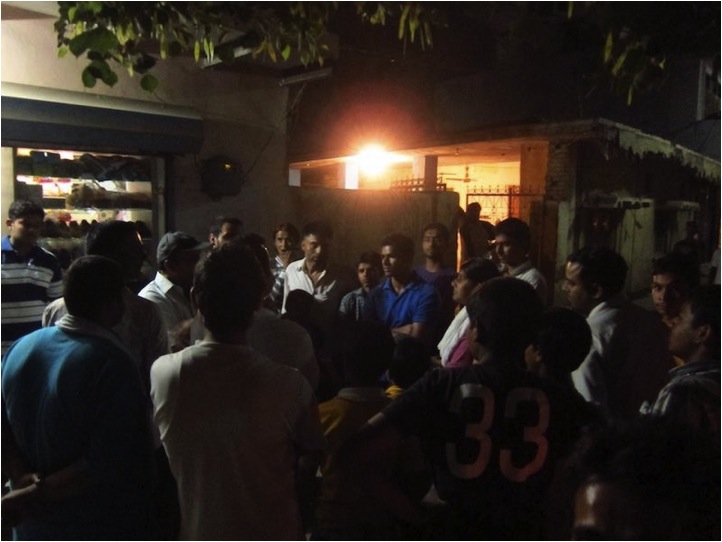 Caption: A forum for democratic discourse ensues between residents. Deepak (in blue) actively participated in the discussion. Providing him with continued example, motivation and support for his own transformative ideas led him to the building of the community akhada. 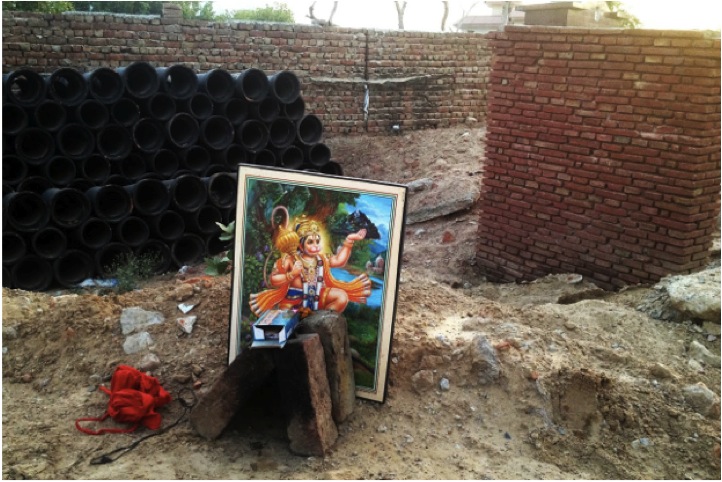 According to Deepak, ‘A truckload of dirt, a bag of almonds and an image of Lord Hanuman is all you need to build an akhada’. The akhada began as a minimum viable space, the basic infrastructure required to begin practicing. It will be formalized and regularized over time, with the community contributing in its development. This additive approach is a perfect example of the democratization of design, as each formal addition of a new design element comes through necessity; each participant has a different vision. The users become the designers. This requires very little investment, and allows for easy testing of the idea.

Caption: A photograph of Lord Hanuman at the Tigra Akhada, the patron deity of wrestlers and athletes, is propped up against a mound of earth and prayed to, just prior to a training in pehlvani. 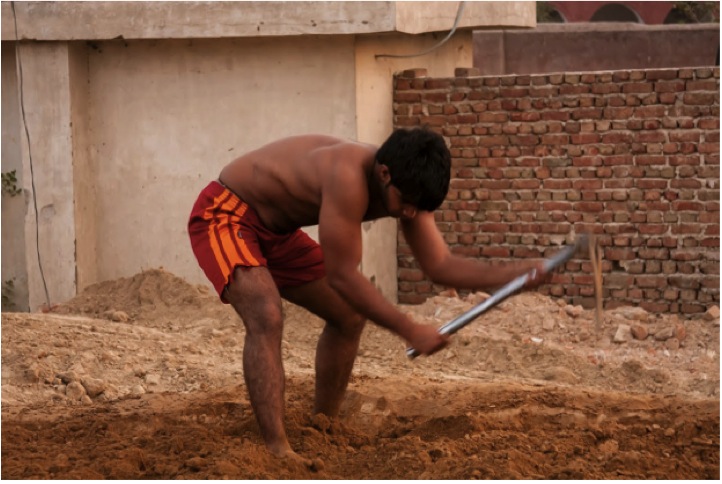 An akhada is a gymnasium or wrestling arena, central to the social fabric of martial communities in northern India. While the form is physical, it embodies a deeper spiritual role. Each day the mound is dampened with water, and dug up to displace the tough topsoil. This particular duty is performed religiously with fixed rites, one elder passing the shovel to the next. The space embodies collectivism in usage and custodianship. The users take pride in building and maintaining the space.

Caption: A resident and wrestler working to loosen the topsoil. 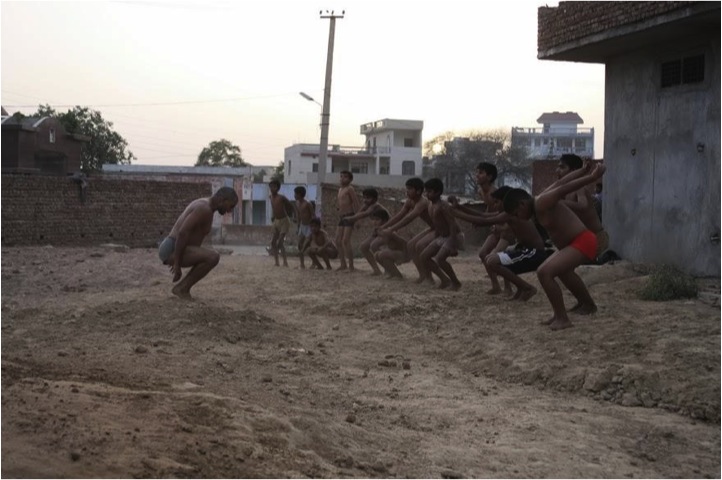 Pehlvani is a collaborative experience; the akhada is built and supported by Deepak and a community of like-minded individuals. Every participant has a role in it’s functioning. Each generation willingly mentoring the next. The space and the activity is highly inclusive, and practitioners don’t observe caste distinctions. Within the circle all are equal. The camaraderie is palpable, and helps in promoting the neutrality of the space in otherwise a highly political environment.

Caption: A group of young boys warm-up for a training session conducted by a seasoned pehlvan. 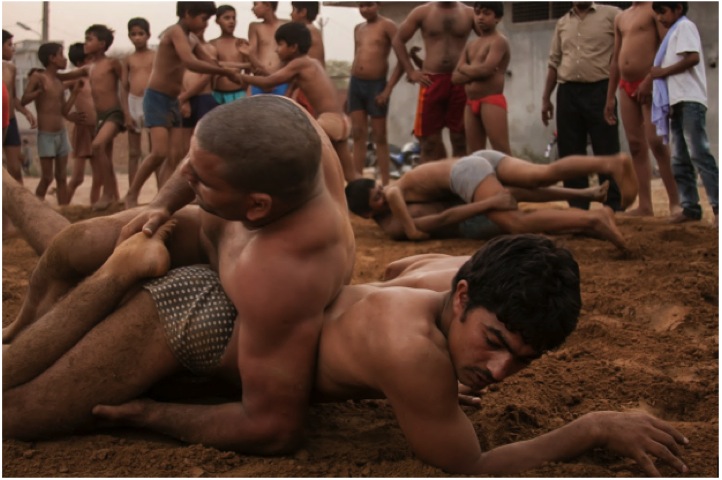 The wrestlers made the space their own and not at the expense of others. Much is possible if residents are activated and supported to create ‘public space’ in their cities or villages. Communities could be encouraged to self program public spaces with the support of city officials in formalising and upgrading the space. Spaces such as the akhada are made by the people who intend to use it, and their collective investment in creating the spaces is central, for it allows a sense of ownership, and way of making it to be determined by communities. This sense of ownership and collective work creates intimacy between people and the space, and further guarantees they will value it and use it. Urban Planning & Design has much to learn from this. 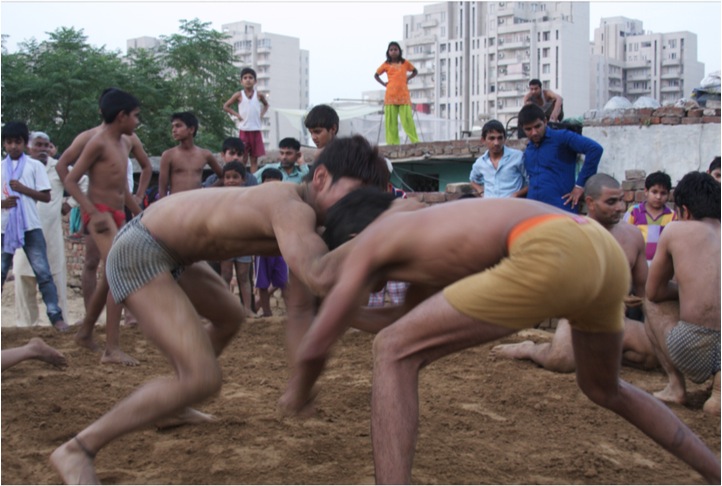 Public spaces like the akhada build collectivism in the community, and provide an example. And the akhada and pehlvani shouldn’t be viewed in isolation. Activities like these keep the larger community involved and engaged. The actions of building, maintaining and using the akhada suggests a sustainable model for social development with potential to yield similar natured spaces for life and citizenship in other parts of the city. At it’s core is an alternative form for community driven urban design and planning. One where the professional becomes a facilitator and collaborator for residents, activated in determining their environment.

Caption: A young girl, traditionally excluded from entry into the akhada, stands on a rooftop for a view of a wrestling match.