Casa Abierta or Open House. A project conceived as an opening up and inauguration of everyday spaces – homes, gardens, and streets – as places for life and union. Places made special and significant through the experience of collective creativity and effort in making public artworks defined loosely as “monuments”. Monuments not in the authoritative or nationalistic sense, but monuments as sculptural objects that “monumentalize” different cultures that participants of our initiative value. A handful of meetings and generative activities were organized to begin a search process for ideas, collaborators and elements of significance. 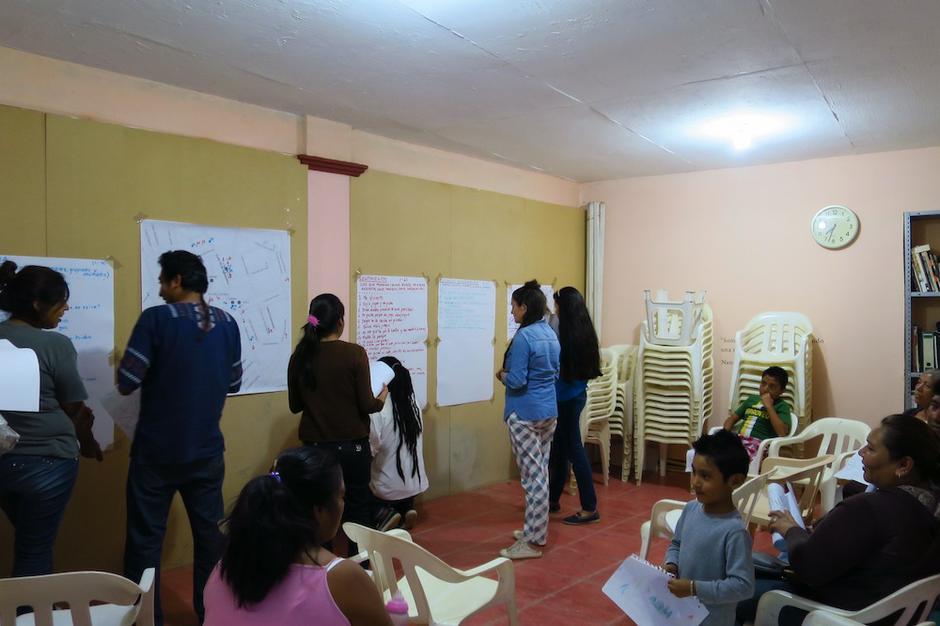 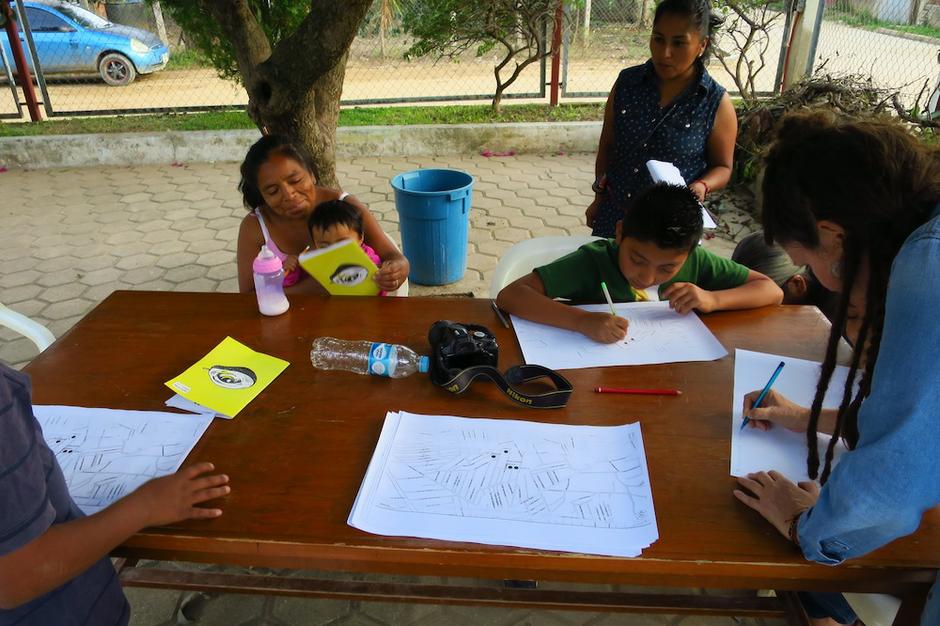 The project began in earnest with Monica Castillo leading a map exercise and I (Alex White-Mazzarella) acting in support at the “COMVIVE” local government center of the Patria Nueva “Colonia” (Colony). The exercise was designed to recall neighbors memories and sensations associated with places in the Colony as a means of identyfing sites of special value or significance. Or sites where a specific intervention may be especially signifacant or valuable. Through the workshop we came into contact with Vicky and her daughter, and Israel his wife Liliana and their children. Residents who all live on the same street in “La Loma” (the hillside of the neighborhood) and who were all especially engaged in what we were doing, but not surprisingly did’nt know each other despite bring neighbors. I paid them a visit the following week to follow up on our discussion and given their interest in being cultural active proposed a meeting amongst neighbors of this Street. From these meetings, would emerge the first monument in La Loma - our first engagement with this part of the neighborhood. 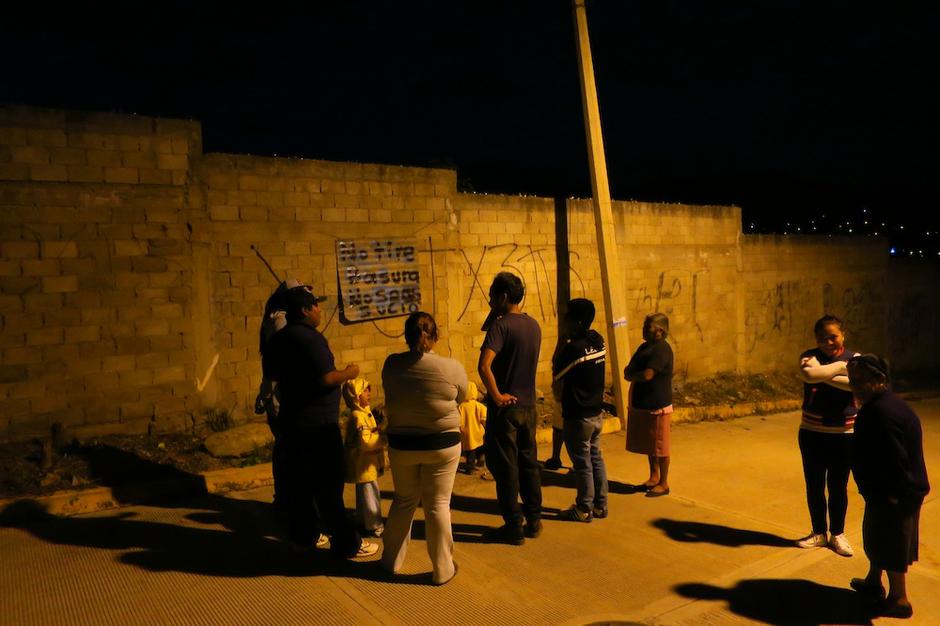 RELAX – THIS STREET IS YOURS

During a round-circle meeting held at the President’s home (who fortunately also lives on the same Street as Vicky, Israel & Liliana), people involved in prior projects explained a bit as to what we had created before, and give a sense as to who we were. There was good attendance, say 10 neighbors – achieved in part through the validation that came way of meeting at the President’s home. During the meeting there came a point where it felt critical to get people out of the president’s home and out into a public space to direct ideas and possibilities into actual space. So we took the group over to some unused space at the end of the street. Wondering what could be created aside from a mural, Jaime suggested a piece of furniture, which strated a whole slew of ideas about creating a nice place to sit relax, and enjoy the view of the surrounding mountains. Perhaps with some plants, a nice mural backdrop, and I insisted a painted Street rug to further the feeling. This event essentially set off a process for a common living room for neighbors and passerbys. Slugging the process forward towards reality.

A date was given for a “tequio” (collective work session) and some neighbors came out to help clean the site of trash and prime the wall for a mural. 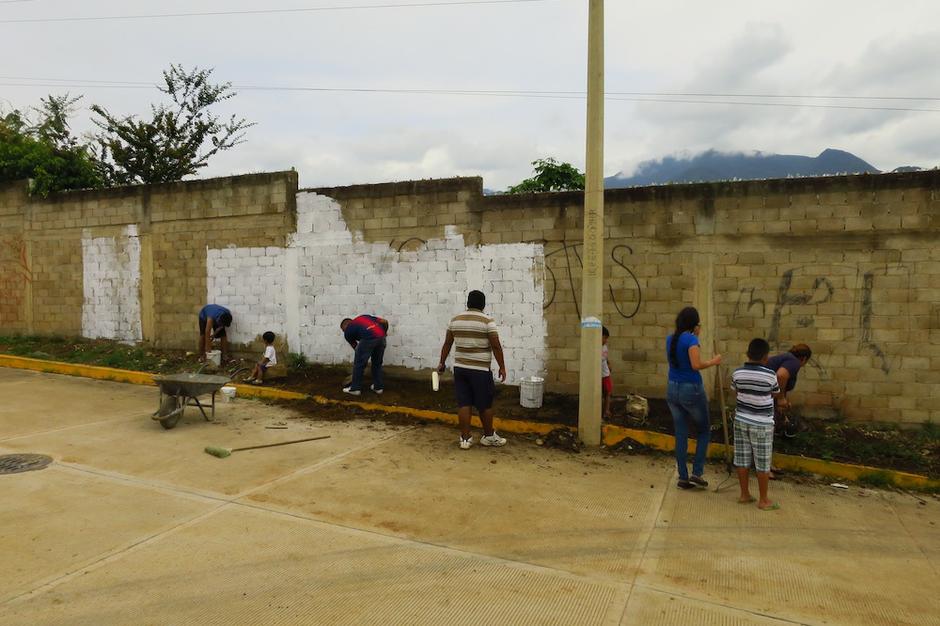 Over the coming weeks, chasing different neighbors to stimulate thinking for a furniture design, a reclined sofa of a style I remember from Long Island City in New York seemed like a popular idea. An ondulant form you can stretch out in, not with fancy cedar Woodas in the original but with reclaimed tires (there’s lots of used tires around). 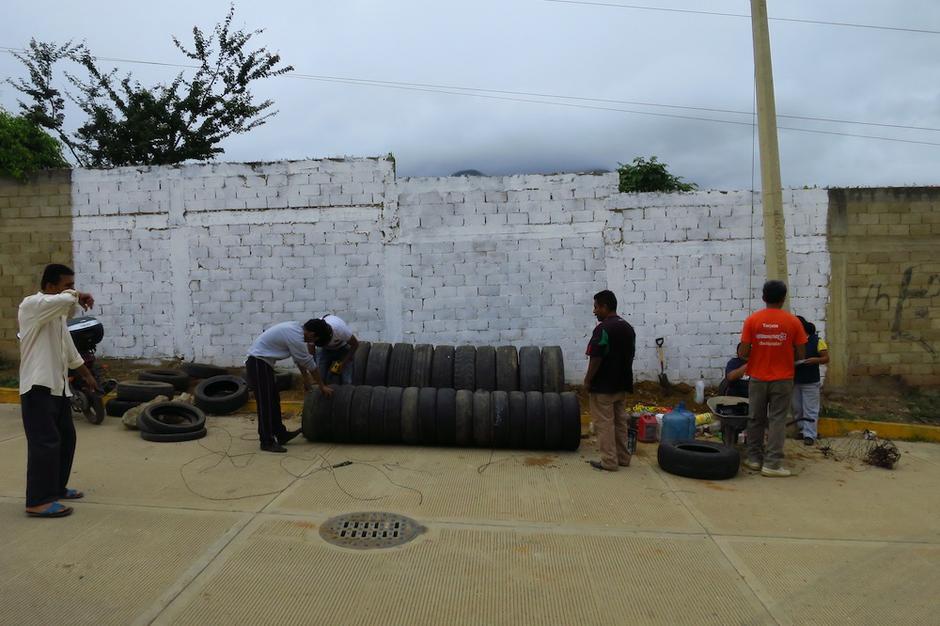 A GARDEN OF PEACE: NATURE’S SCULPTURE

In the Nueva Patria project space, Roberto, Julio, Naxhielli and Bomaro over time assisted me in constructing a small botanical garden – A Peace Garden – treating diverse cactus and succulent species as sculptures in their own right. With ambiant night light design by Roberto. 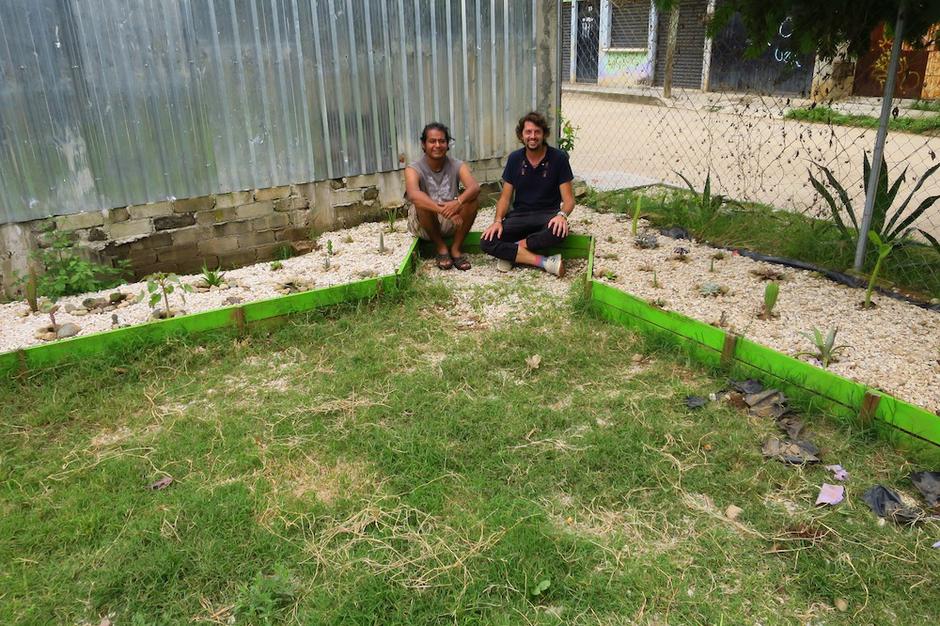 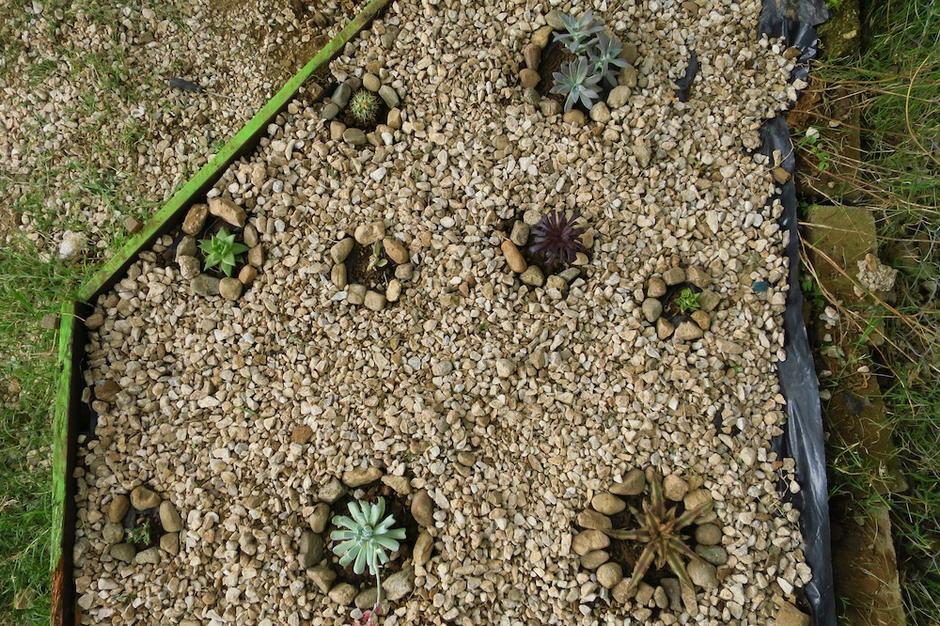 The central thrust of this entire project was towards “Hotel Plantas”. The most ambitious and complicated installation that serves a medley of functions; visually aesthetic, ecologically educational, a source of nightlighting for the space, an infrastructure for food production, and demostrative site that exemplifies how aquaponics & hydroponics work (which in fact has left many neighbors interested in building their own systems). This aquaponic garden, conceived of as an ecosystem of sorts funtions with a 600 liter tank, home to eight Tilapia whose excrement serves as excellent source to mineralize the water to feed the plants. The plants in turn clean the water for the fish excrement; perhaps a beautiful monument to harmony, and synergy. A small electrical pump circulates the mineral water through the roots of 164 plants over 36 meters of tubing that slowly cascades back down into the fish tank only to be cycled back to the top. Constructed out of adjoined PVC piping, the hydroponic garden accomodates herbs, fruits, lettuces and vegetables. 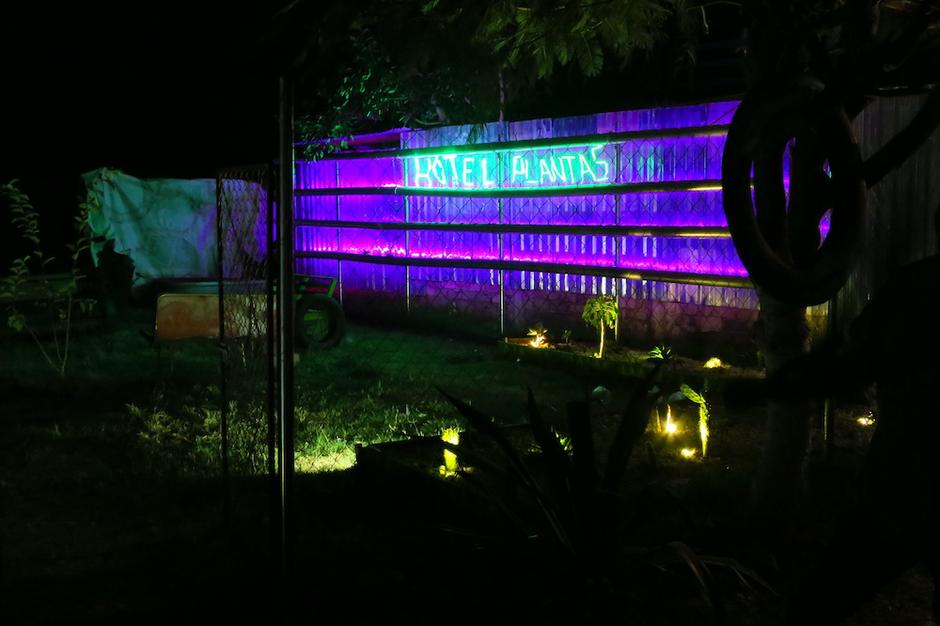 At night, 36 meters of LED lights illuminate the entire system and the public space turning it into a night-time aesthetic for passerbys, a lighting ambience for meetings and activities complimented nicely with the relaxing sound of water cascading down from one level to the next. The entire system is powered by 200 watt solar panels that sit on Julio’s house, who lives on the other side of this wall, and who is taking care of the second round of plants (a full load of lettuces). 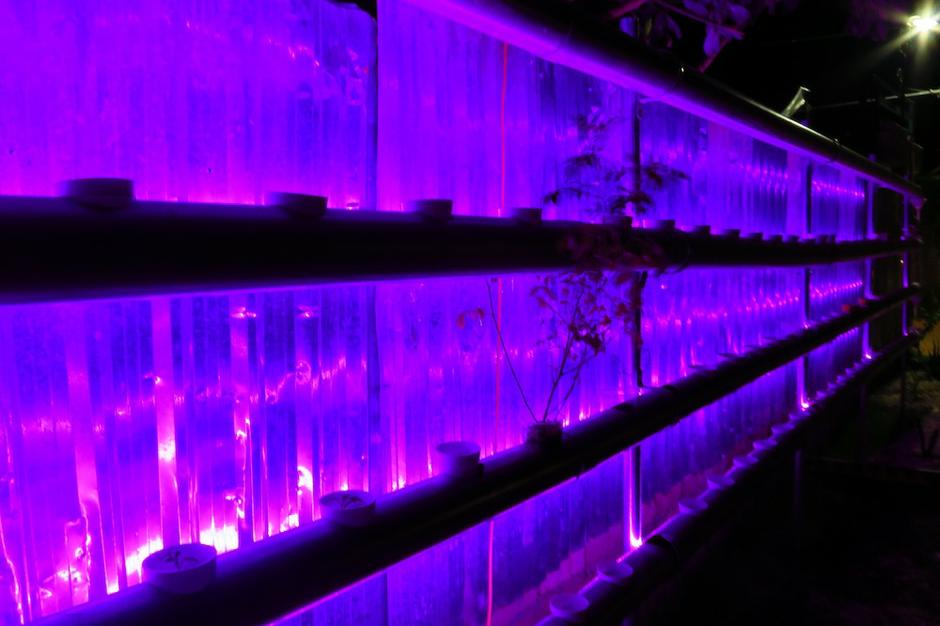 “Hotel Plantas”; a quirky concept to convey this artwork/infrastructure as a “lodge” for the plants, vegetables and fruits. A garden that can lodge the fresh produce of and for neighbors. Infinite arrangements and possibilities for how neighbors can be related to one another through this garden. Its thus a platform onto which different projects and programs can be run from the Hotel Plantas, and also important to note a platform onto which different economies can be experimented – from gifting produce to neighbors, to selling produce to local restaurants, to perhaps facilitating Exchange between project participants. 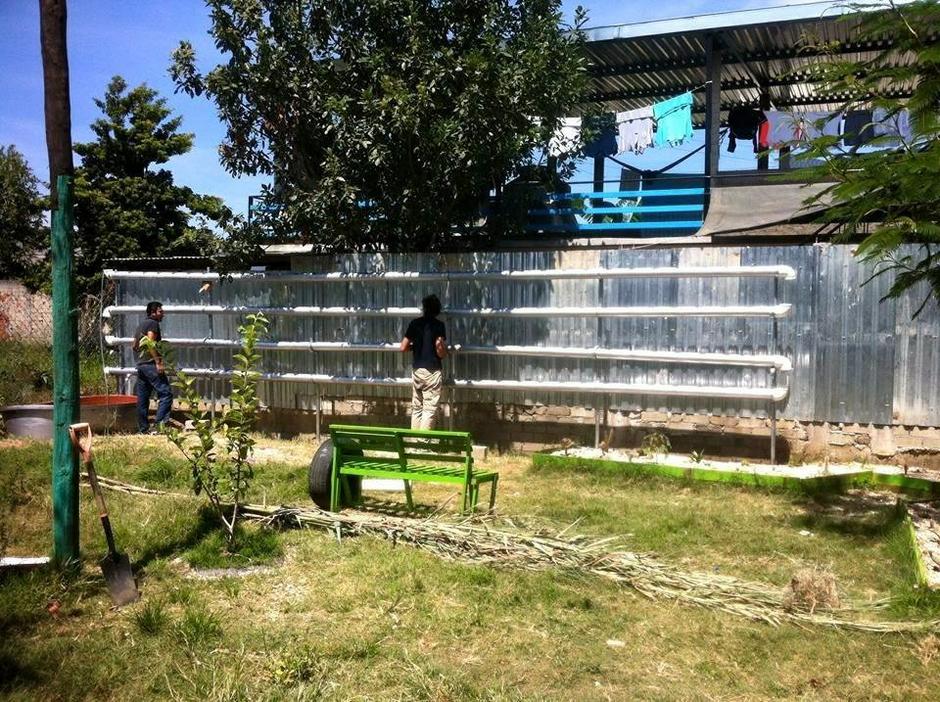 The birthday of Elodia, a caring artesan and participant in the Nueva Patria network, was a great means of bringing neighbors together to inaugurate our different creative monuments with the larger Colony. This is the second year in which this date is used by Nueva Patria to bring forth a community project. This year the form was a “Calenda”; a Oaxaquen celebration of spiritual force that regenerates family, community and personal ties. It is typically a celebration of a Patron Saint, but instead we chose to design it as a performance to energize and further bring together a community in the making.

“Monos”, gigantic puppets made from paper mache were created during a workshop, led by Angelica Peralta who was invited to our public space to lead a workshop on how to make them. Participants organized accordingly to bring these two sculptures to life, creating their clothing & playful identities. 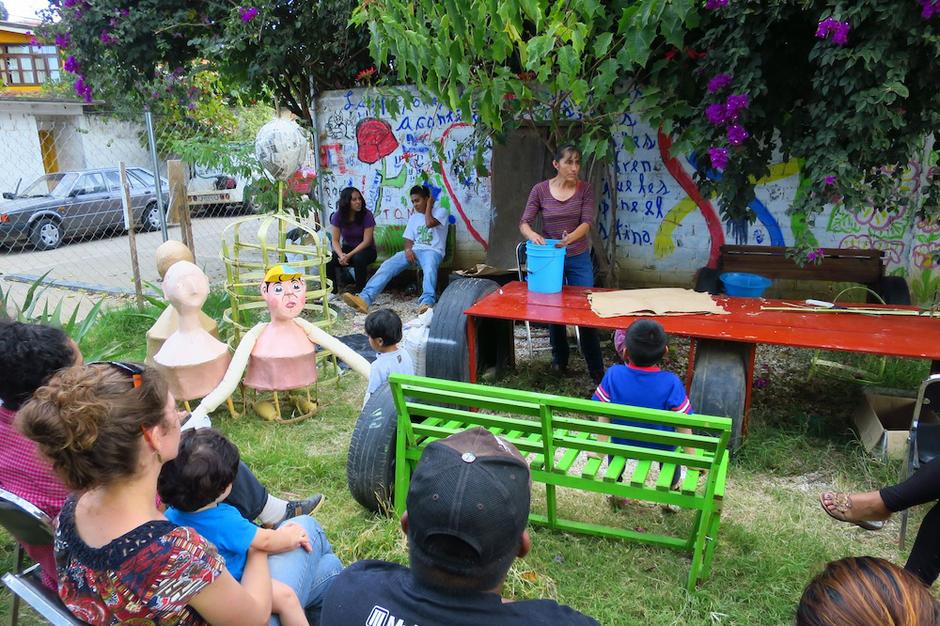 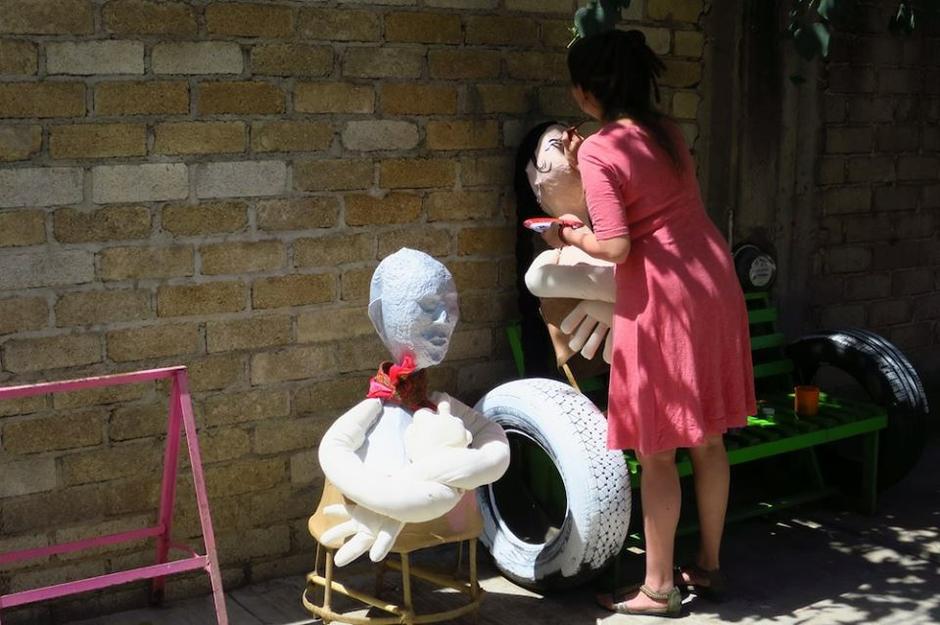 Monica puts the finishing touches on our “Monos” Stan and Bruna 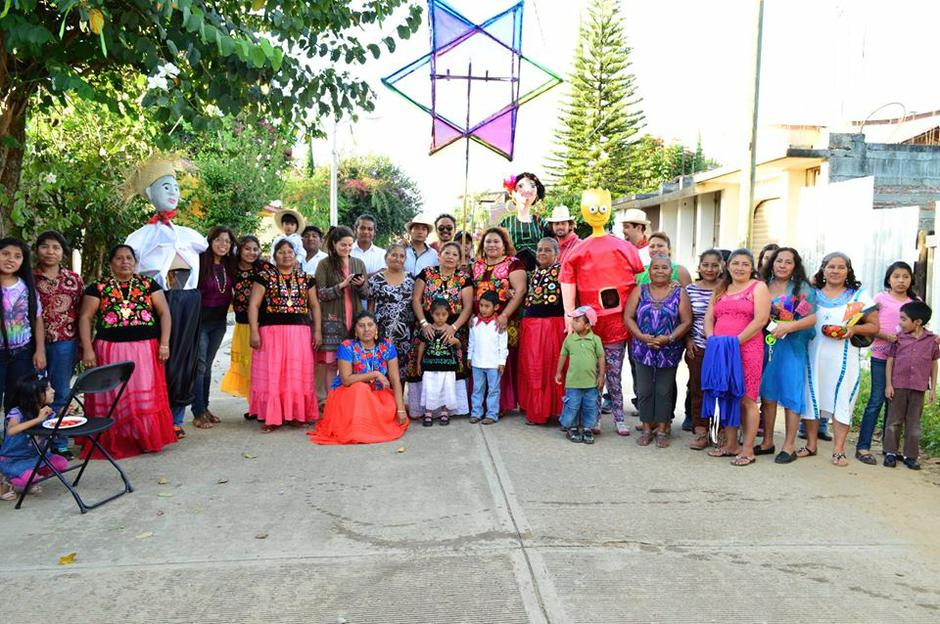 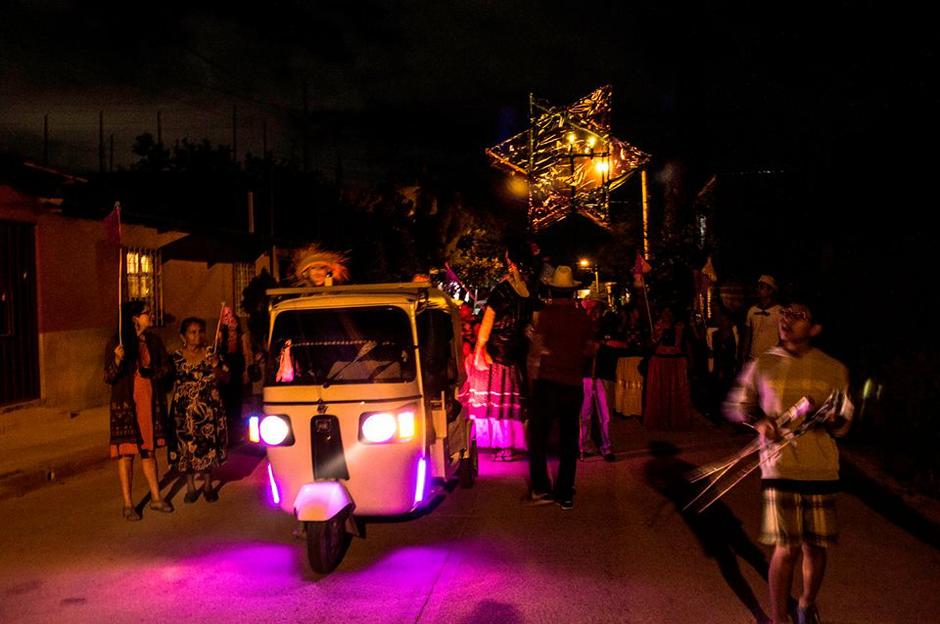 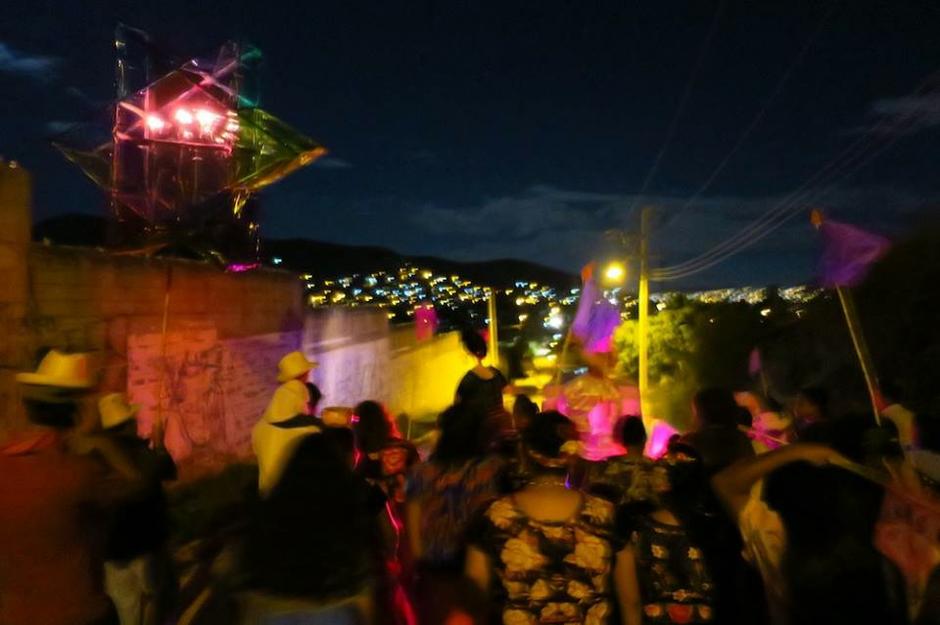 The calenda parade of the Colony stopped at the sites of creations to inaugurate them and recognize the collaborative work that people put in. A moto taxi led the way playing music instead of the typical band, and those marching throwing candy and giving shout outs of praise. 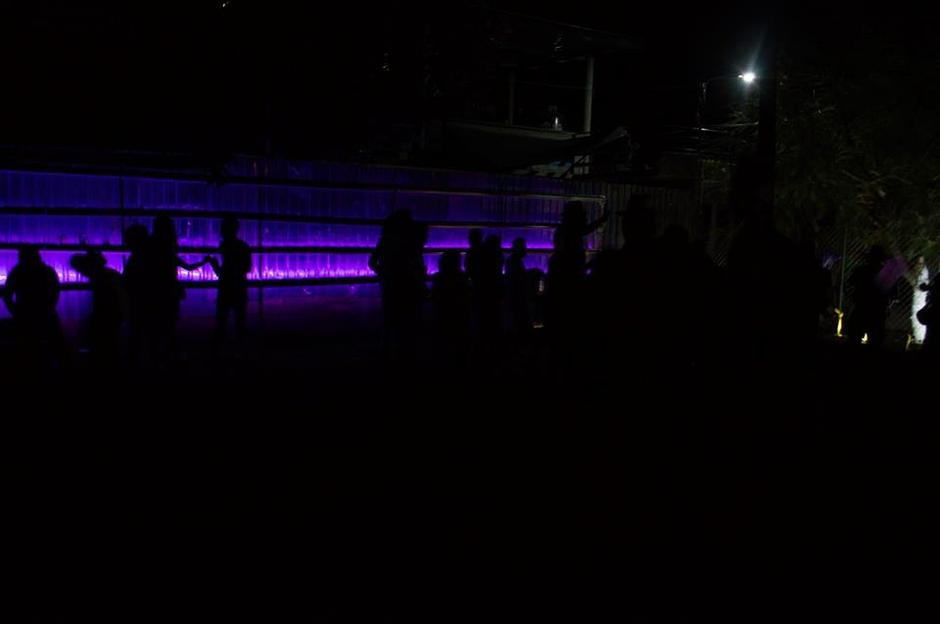 The calenda parade draws people into the public space to learn about the aquaponic garden and invite participation in the future.