Alex White-Mazzarella is the Founding Director and Manager of Artefacting. An artist & urbanist he sparked Artefacting as an initiative in utilizing art, collaboration and positivity as means of building community and engaging the pressing social and cultural issues at the community level. With courage, multiculturalism and global insight in hand, Alex is passionate about bringing diverse audiences together. Through Artefacting he conducts artistic interventions from the inside of a community out to spawn fresh perspective, possibilities and boost social cohesion.

He received his BA in economics at Clark University (2002) and studied Urban Planning & Architecture at Portland State University and Universidad Politecnica de Barcelona. He developed the Central Waterfront Planning and Design Competition as the Program Manager of Designing Hong Kong before moving to New York City to work as an artist - training under Hugo Bastidas, Phillip Sherrod and Larry Poons at the Art Students League. His work is in private collections in the USA, Europe and India and he exhibits regularly in New York City. www.lamazza.com is his personal website. 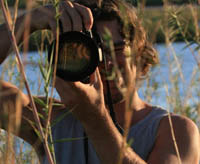 Through his extensive travels, Arne de Knegt has had the fortune of being part of everyday realities of many of the world’s cultures, societies and religions, shaping his nature as a world citizen. As a photographer and idealist, he sees Artefacting as a way to re-shape the way we think about our world and the many components it exists of. Through human interaction and addressing issues of social nature, his passion lies in looking for a more just society.

His background in Urban Planning and his logistical knowledge - built up through years of freelancing as a stage technician on world tours of large rock-n-roll bands - enables him to analyze local issues at a transparent level combined with logistical engagement in making Artefacting’s public activities possible.
His photographic works have been published and exhibited and are in private collections in over a dozen countries worldwide. Arne has been central to Artefacting’s establishment, figuring in largely to the Dharavi, Detroit, Willets Point and Global Village projects. www.arnedeknegt.com is his personal website.

Casey Nolan received his BA in environmental studies at University of Montana (2002) and Masters in urban planning at Portland State University in 2005. In 2006 Casey embarked on a six-month trip through Southeast Asia where his passion for photo-journalism was born. He has since worked as a project manager in both photo and video production throughout the United States and the Caribbean. He currently works as a freelance photographer and videographer in Portland, Oregon.

While exploring lesser traveled parts of Turkey & SE Asia, Casey realized the value of connecting with local communities. Using little more than a smile and sincere conversation, he was amazed by how welcomed he was into the hearts of local people. Casey sees Dharavi as a unique opportunity to merge his passions of urban planning and video/photo production. Knowing how powerful video can be to engage marginalized communities, Casey is excited to get back to his planning roots while sharing the story of Dharavi to the broader public. 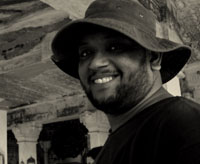 Parasher Baruah is an FTII Pune graduate in Cinematography and balances his work in Mumbai with work in Northeast India. He has been associated with a number of feature films and documentaries as a Director of Photography and is now beginning to direct films as well. His documentary about the lives of 3 ‘rag pickers’ in Dharavi, titled “Waste”, was screened at the Dokfest in Munich in 2009. He has also shot the highly acclaimed documentary “Supermen of Malegaon”. Presently he is working on mapping the social and political history of Nagaland with a photo-documentary project titled- “A map of human faces”. Under the banner of Bluevanda Films, Parasher, along with several collaborators, is involved in developing original content for short fiction films based in Northeast India.

Besides exploring video art and photography, working on The Dharavi Project on social & developmental communications and film making, Parasher also loves to experiment in the kitchen! 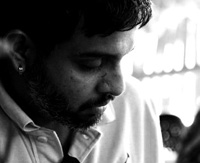 Nishant Nayak is a filmmaker and media professional based out of Mumbai, India. Over the last eight years, he has been involved in several aspects of media production, from producing engaging shows on Indian music channels to directing television across kids and reality genres and being a network programmer for one of India’s premier general entertainment networks. More recently, he set up his own film production label, Black Balloon, that produces corporate communication films for varied clients across the Indian business sector. More personally, he seeks to bring together his love for music, film, design and emerging media through internet/mobile audio-visual engagement.

Having lived in Calcutta, Boston and New York, he still loves his multi-layered city of Mumbai with its myriad stories to tell and recommends the Mumbai experience to anyone in search of an education. Nishant received his BA in English Literature from St. Xavier’s College, Mumbai in 2001 and a Master’s in Visual Media Arts at Emerson College, Boston in 2006.

Deepak & Ravi Gori - Special thanks goes out to our Dharavi Support Crew at D. Dayaram & Sons, dealers in: Empty Barrels, HDPE Carboys, All Kinds of Scrap - Including Chemical Waste & Solvent

Deepak & Ravi run a scrap recycling business in the heart of Dharavi’s industrial 13th Compound, where the majority of the project’s field research takes place. They are instrumental in supplying the project team valuable information concerning project materials and logistics.

Julie Sauton is a Community Development major at Portland State University, focusing on International Community Development. After traveling to Brazil in December 2009, Julie became fascinated with informal settlements by learning about the unprecedented social, political, economic and environmental issues of Rio’s favelas.


Julie is excited to work with Artefacting Mumbai because the project combines her two greatest interests, art and community development for the purpose of spreading awareness and building strong communities! She is assisting the team from Portland by bringing additional print and digital press to the project.

The Brooklyn Arts Council is an arts and services organization founded in 1966 and is the umbrella for Brooklyn’s range of cultural groups and individual artists working in the visual, performing, media, and literary arts. BAC helps Brooklyn’s artist population create and present their work and ensures that thousands of people throughout Brooklyn have access to a variety of free arts programming each year. Their programs are essential to the livelihoods of thousands of artists, creative professionals, and arts organizations across the borough.

The Indo-American Arts Council supports all artistic disciplines in the classical, fusion, folk and innovative forms influenced by the arts of India. We work cooperatively with colleagues around the United States to broaden our collective audiences and to create a network for shared information, resources and funding. Our focus is to work with artists and arts organizations in North America as well as to facilitate artists and arts organizations from India to exhibit, perform and produce their works here.

The ICD is an international, not-for profit, non-governmental organization with headquarters in Berlin Germany. Over the past decade the ICD has grown to become one of Europe’s largest independent cultural exchange organizations. They facilitate interaction between individuals of all cultural, academic, and professional backgrounds from across the world. The ICD is publishing updates about Artefacting Mumbai on their blog and social media platforms to bring the project to a broader European audience.

Mercy Corps will host the Portland multi-media exhibition at their Action Center Gallery in downtown Portland. The two-month exhibition will take place in the spring of 2011 and will include additional educational programming built around their mission of helping people in the world’s toughest places turn the crises of natural disaster, poverty and conflict into opportunities for progress.

The Dharavi Project, an initiative of the ACORN Foundation (India), is a multimedia project that utilizes artists and social-impact programs to change the living conditions of over 100,000 ‘rag-pickers’ who are segregating waste from the landfills of Mumbai. The project has been working with the community of rag-pickers in the slums of Dharavi, and hopes to give them the credit they deserve as green collar workers. The hard labor of Mumbai’s rag-pickers has ensured a place for Dharavi as one of the largest recycling hubs in Asia.

Tablet Hotels is the most reliable and comprehensive source for unique hotels around the world. Featuring rich imagery and detailed consumer reviews of the hotels, Tablet Hotels features outstanding hotel properties that are defined by strong personality and attention to detail - from select Ritz-Carltons to the 10-room modern design statement or classic hideaway. New articles are posted every week on its blog, Tablet Talk, on travel, culture, design and 21st century global living. Tablet Talk will feature photos, writings, and video clips from Artefacting Mumbai bringing updates from Dharavi to their community of savvy travelers.

PPS is a nonprofit planning, design and educational organization dedicated to helping people create and sustain public spaces that build stronger communities. Our pioneering Placemaking approach helps citizens transform their public spaces into vital places that highlight local assets, spur rejuvenation and serve common needs. Through research, conferences, and strategic partnerships, PPS promotes Placemaking as a transformative agenda to address some of the most pressing issues of our time. In its broadest application, Placemaking is a catalyst for building healthy, sustainable and economically viable cities of the future.

The mission of the Nohad A. Toulan School of Urban Studies and Planning is to assist in the development of healthy communities through an interdisciplinary program of teaching, research and public service. Faculty and students engage the intellectual, policy and practice aspects of urban studies and planning from the local to the international levels and actively participate in the analysis, development and dissemination of the innovations for which Portland and the Pacific Northwest are known.

Aroon Shivdasani is the Executive Director and founding member of the Indo-American Arts Council: a council created to “build an awareness of Indian artists and artistic
disciplines (performing, visual, literary and folk arts) in North America.” With a Masters Degree in English literature and drama, Aroon has worked in marketing, advertising, media research, taught at high school and college, run a theatre company in Canada, been a docent at the Corcoran Gallery in Washington, been Editor of the Junior League Newsletter, acted, danced, painted, thrown pots, worked in ceramics and stained glass. She left her position as Adjunct Professor of Creative Writing & English literature and VP of her husband’s marketing company, to take on her current position in 1998.

Vivek Shandas is an associate professor in the Nohad A. Toulan School of Urban Studies and Planning, and a Research Associate in the Center for Urban Studies at Portland State University. He is the founder of the Sustaining Urban Places Research Lab, where his team focuses on the following areas of investigation: 1) examining feedbacks between environmental change and human behavior; 2) developing community-based indicators for measuring the social and environmental conditions of urban ecosystems; and 3) characterizing the relationship between urban development patterns and environmental quality. He teaches undergraduate and graduate courses in participatory geographic information systems and environmental planning. Vivek publishes widely in social and natural science journals, and serves as a reviewer/technical advisor on several local, state, and national organizations.

Logan McClain graduated from Colorado College with a B.A. in Economics in 2001 and went on to earn a Masters in Architecture from Iowa State University in 2006. His multi-disciplinary perspective and coming from a family firmly grounded in the arts, Logan is a key advisor to Artefacting Mumbai. His experience is being used in developing the project concept and fundraising.

Andrew Usher graduated from Colorado College with a B.A. in International Politcal Science and Economics in 2000. He is a financial representative at Northwestern Mutual and a supporter of the cultural arts and community events. Andrew’s focus is on the fundraising strategy of Artefacting Mumbai.