As part of special programming looking at art as a tool for urban research and experimentation, in connection with the current exhibition Detroit Disassembled: Photographs by Andrew Moore, the Queens Museum of Art has invited the Artefacting Collective to do a walk-through of the exhibit, followed by a presentation of Artefacting’s own recent work in Detroit. Artefacting’s exhibit IMMERSION about their work in Mumbai is also on view in QMA’s Partnership Gallery from October 15-November 6. 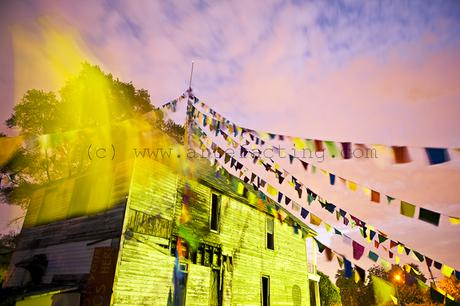 Artefacting Collective members Alex White-Mazzarella and Arne De Knegt, & supporting artist Joao Henrique Brandao, will report back from their 6-week immersion into Detroit’s Motor City in the summer 2011. White-Mazzarella and De Knegt combine their Urban Planning backgrounds with arts and a desire to use storytelling to connect peoples and cultures. Artefacting went to Detroit to bolster community-led revitalization through inclusive public art, and promote social justice by holding workshops and recording the pulse of the people of Detroit’s East Side.

Photographer Arne de Knegt and visual artist Alex White Mazzarella have been processing and articulating the Detroit Black Bottom neighborhood’s current state and the local community’s efforts in transitioning into a new future. Their artwork and interventions articulate findings and perspectives gained through their engagements with marginalized groups and individuals.
They will present documentation from the project including the public art SPIRE: Beacon of Hope, in which Detroit residents brought their own personal flag (any material, size, or color) or made one onsite as a peaceful act of regeneration from the murders and negative community activity. An abandoned and charred house with recent history of murder served as the canvas for the interactive public artwork. Further artwork, photography and video documentation will be on exhibition at Local Project in Long Island City, Queens from November 5 to 15th.

Their local partner, the Heidelberg Project, has already played a tremendous role in revitalization using the power of art and collaboration to transform abandoned houses into an open art museum that exhales hope instead of despair. Twenty-five years later Heidelberg Street is considered a tourist attraction and is visited by over 250,000 people a year. Artefacting is also artistically renovating “The Numbers House”, bringing it a bit closer to its objective of being a community center. Local partners Olayame Dabls, owner & creator of the African Beads Museum, and Michael Wimberley of the Friends of Detroit collaborate.

Photos of the Reportback