In June of this year I was approached by the New New Yorkers program about helping to design a workshop for a joint event with a local organization: Adhikkar. They were interested in producing an artist-led activity that reflected the local Nepali community’s multi-ethnic character and took into account the organizing efforts of Adhikaar. This is not an easy task.

First, José E. Rodríguez and Nung-Hsin Hu proceeded to introduce me to various Nepalese individuals with some experience in producing cultural events as a means to better understanding not only Nepalese culture but what it looks like in Jackson Heights. Cultural events serve to celebrate Nepalese identity, maintain ties to home, and bring the community together and even help some make a living. One member was busy trying to replicate a Nepalese home as the stage to a night of dinner, theatre and music at a local performing arts space. Other young men of Magar ethnicity told us about music performances they organize that adapt traditions into a more modern music to appeal to youth. Nung-Hsin was busy trying to support these individuals with transportation and design assistance to help people make culture accessible to local Nepalese population.

On the 4th of July Nung and I joined Adhikaar in attending the 31st American Nepalese Association (ANA) convention at Hilton Hotel outside of NYC that highlighted different Nepalese civic societies such as Adhikaar. A festive parade led crowds inside to begin the day’s lineup of celebratory speeches and events. 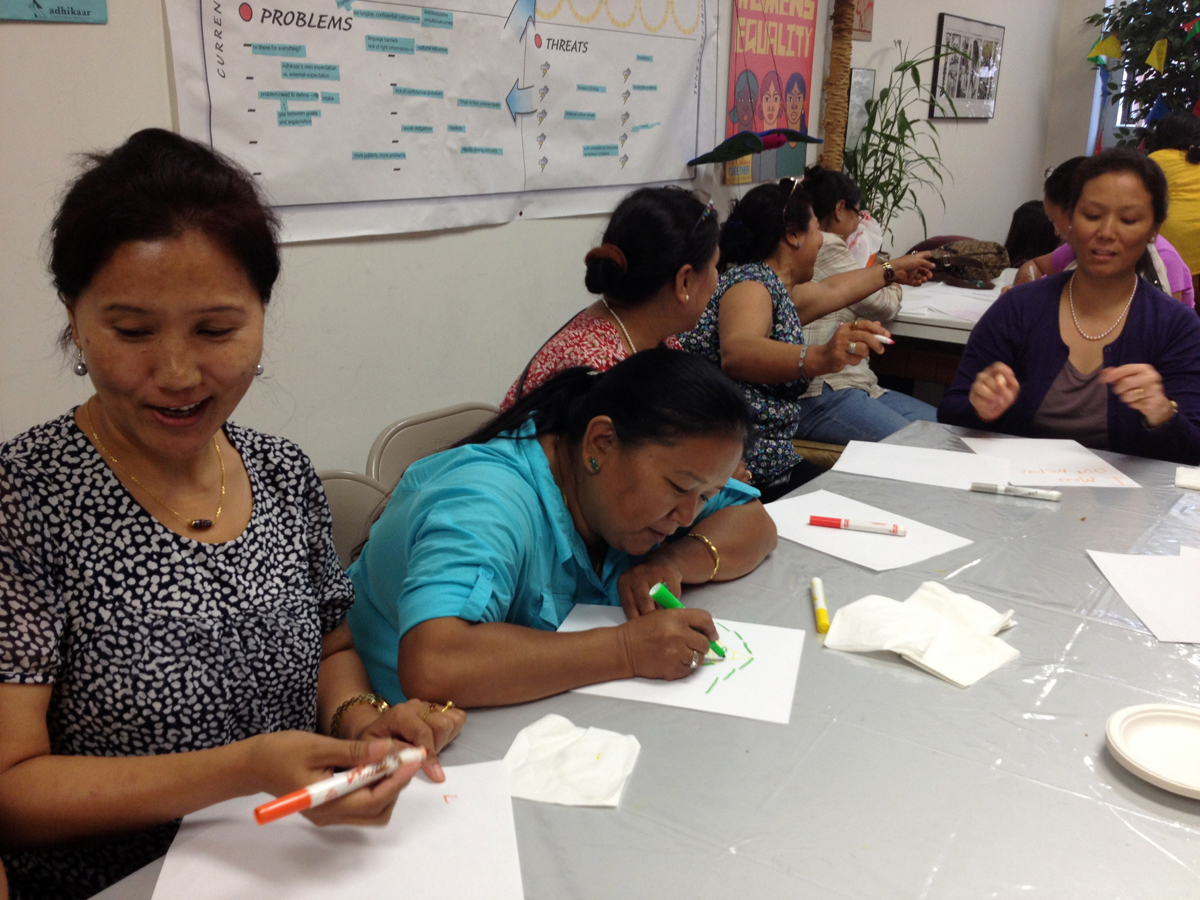 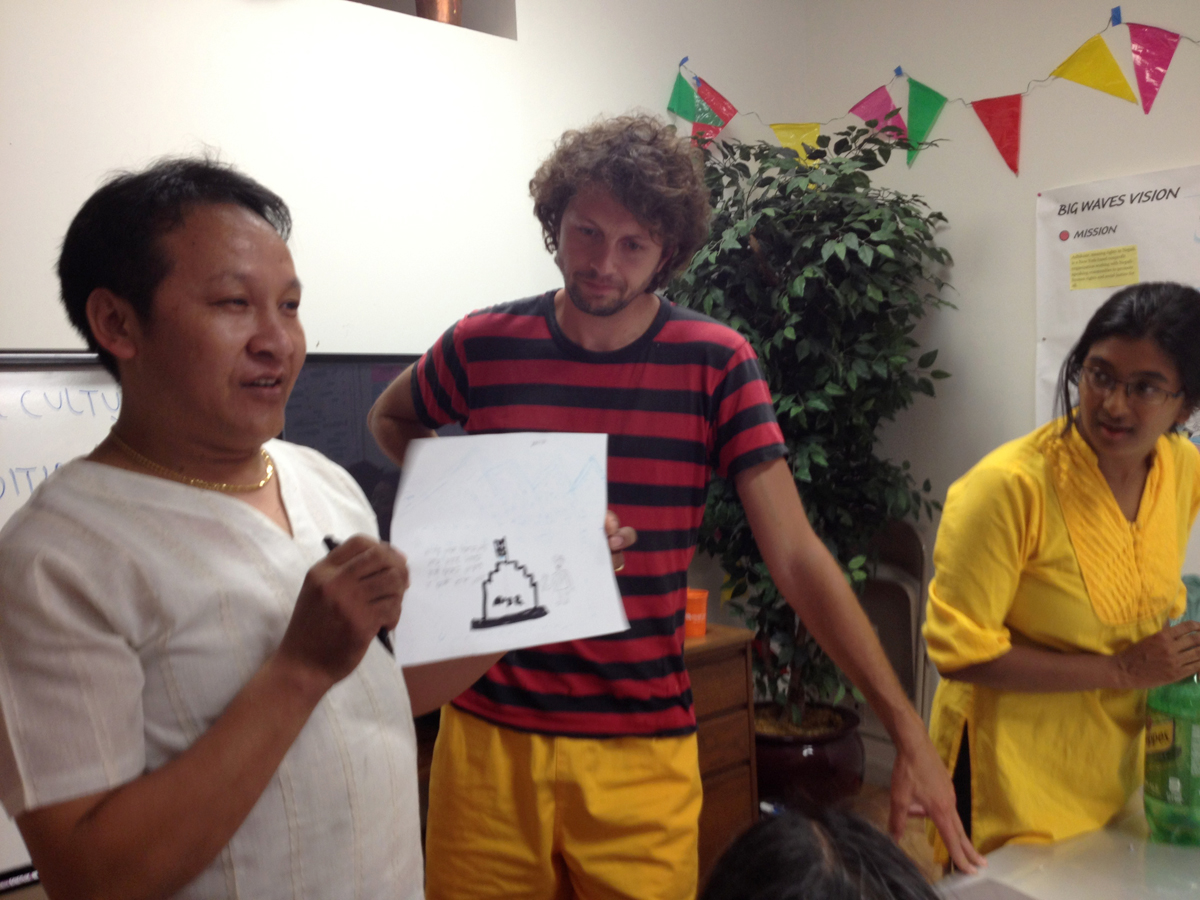 Back in Jackson Heights Adhikaar office with an improved sense of understanding of the cmmunity and their cultural efforts, we began the workshop. With the help of Adhikaar members we posed a simple question to the community; what is missing from home, what do you long for, and what is a story that is close to you from home? The mostly woman audience drew pictures and recalled stories that brought back the basic life; the dramatic beauty of the land and Himalaya Mountains, times spent with family and everyday way of life like making Puja or prayer at home and at the temple.

With these stories and ideas, I undertook some research and continued discussion with Nung and Adhikaar members brainstorming an event that would not just be a constructive exercise but hold meaning, significance and serve to heal and bind the Nepali participants. For Narbada Chhetri, a facilitator and leader at Adhikaar, this brought to mind a tradition from Nepal – the Mha Puja. Mha Puja is a self-prayer practice with a process to purify and strengthen oneself. Excitement filled the room as Raji and Narbada from Adhikaar and I became excited with ideas of adapting and enacting it as a cultural event for the community to participate in.

Following an Adhikaar English class on Sunday, Raji, Narbada and I presented our basic idea to members. What if we were to create our own Mha Puja that could utilize letters, stories, beliefs and good wishes? We were met with enthusiasm and smiles from the community, with one member even exclaiming “you understand our needs”. 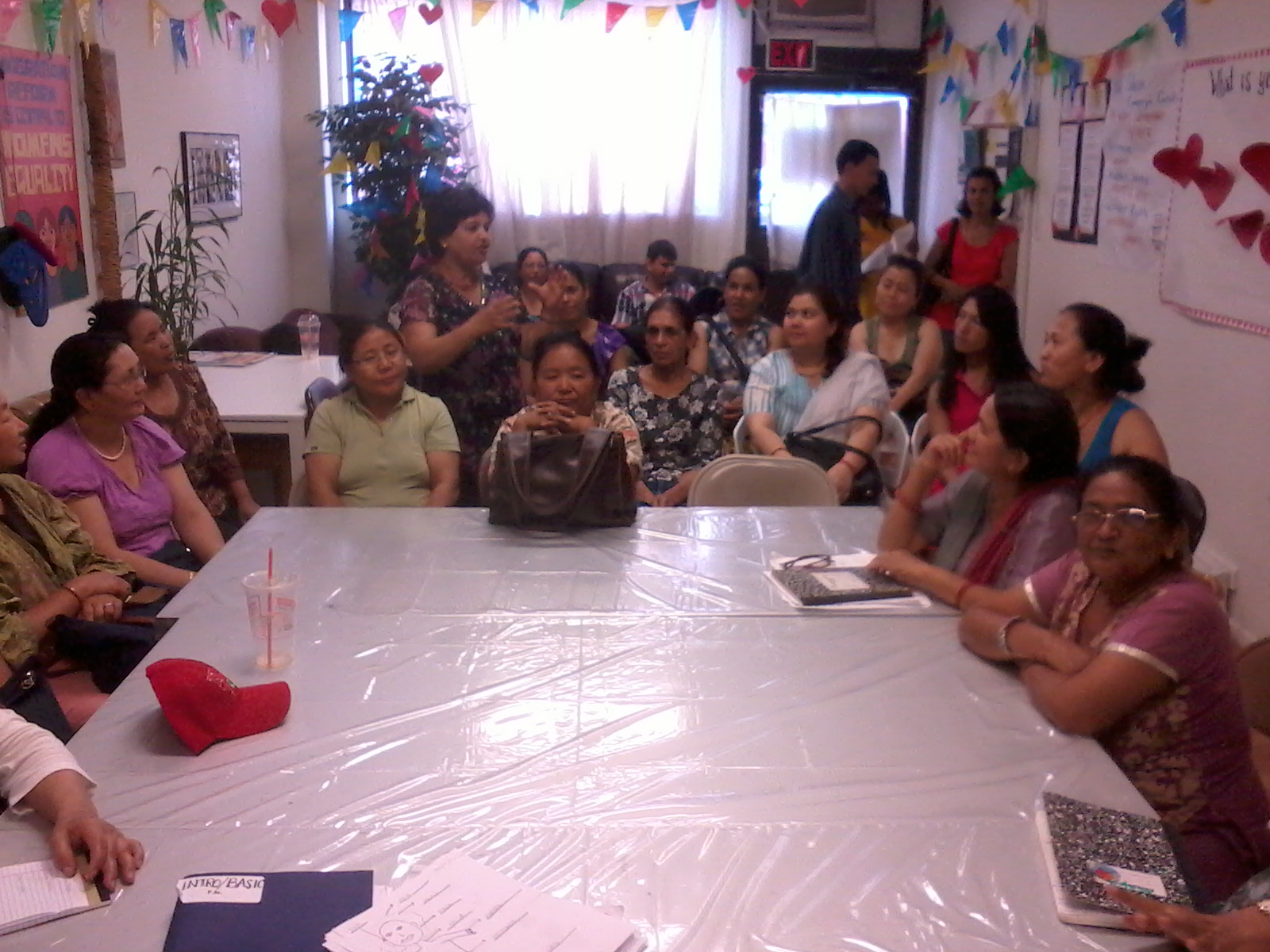 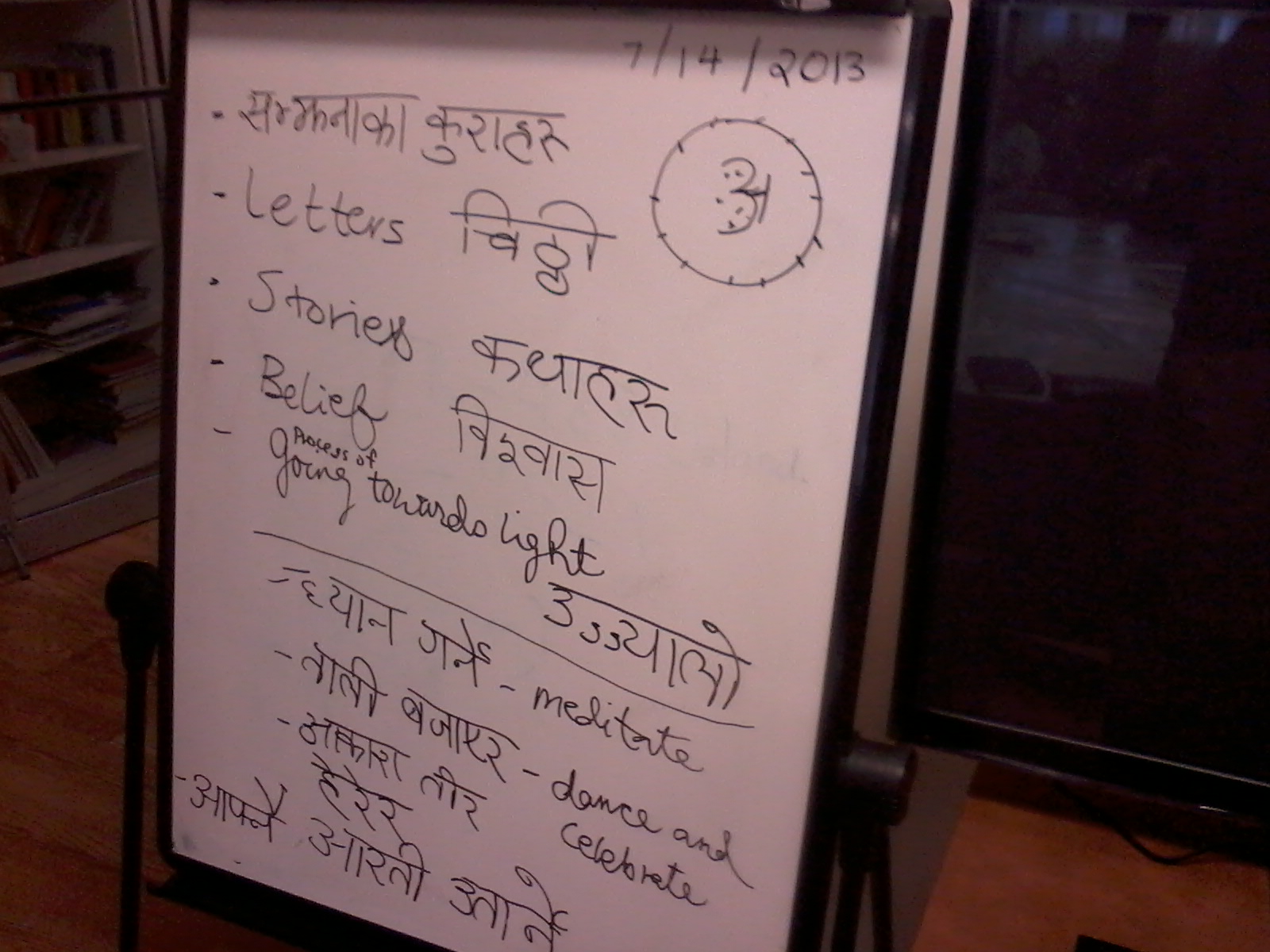 But there was not much time to really develop the vision. Raji and I initiated a dialogue on how this could be done and though the excitement was there we clearly needed more time to hold a workshop with community members to meld and mold it. I had only a few days to develop it further before having to leave to Germany for another assignment.

On August 4th the picnic was a fun celebratory event but maybe not quite the setting or venue to start to reflect on self-prayer! Nung did a fantastic job coordinating a drawing event for children incorporating traditional food and color sand used in Puja. 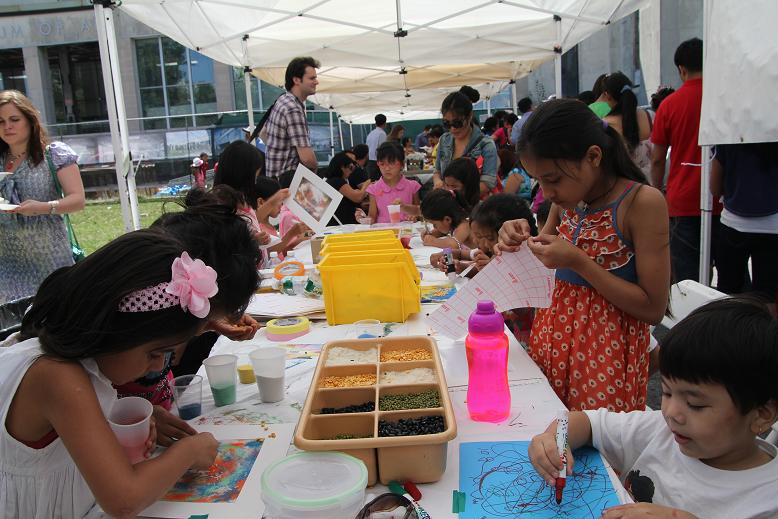 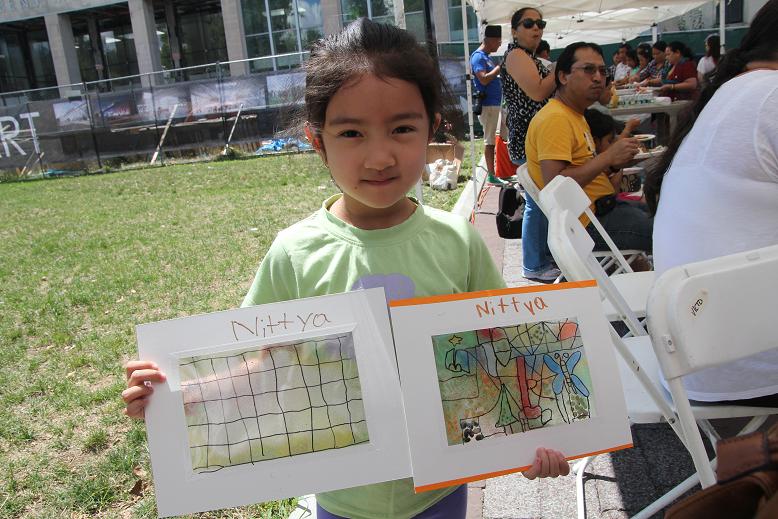 As per the actual Puja, Narbada led the way using flowers and flower petals and color sand to create a large circle around which dance and prayer occurred. I was torn to not be there but was happy to hear that the picnic was a great celebration for Adhikaar’s 10 years of operation and support to the community. The vision for the Mha Puja remains and we look forward to a future opportunity to bring it to life to support community members. 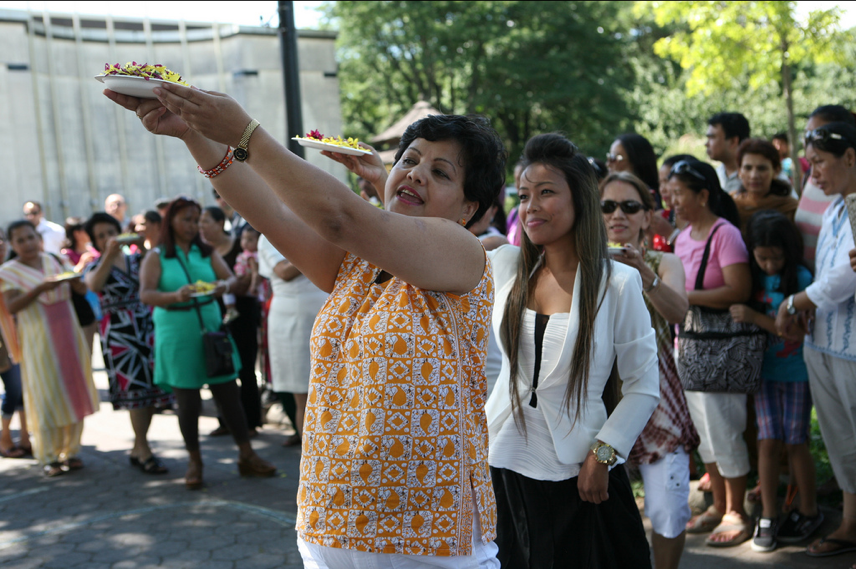 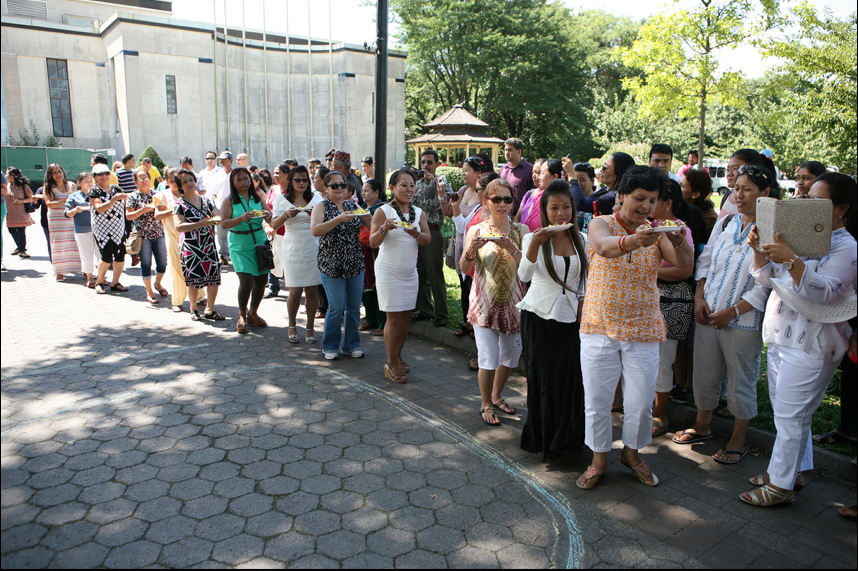 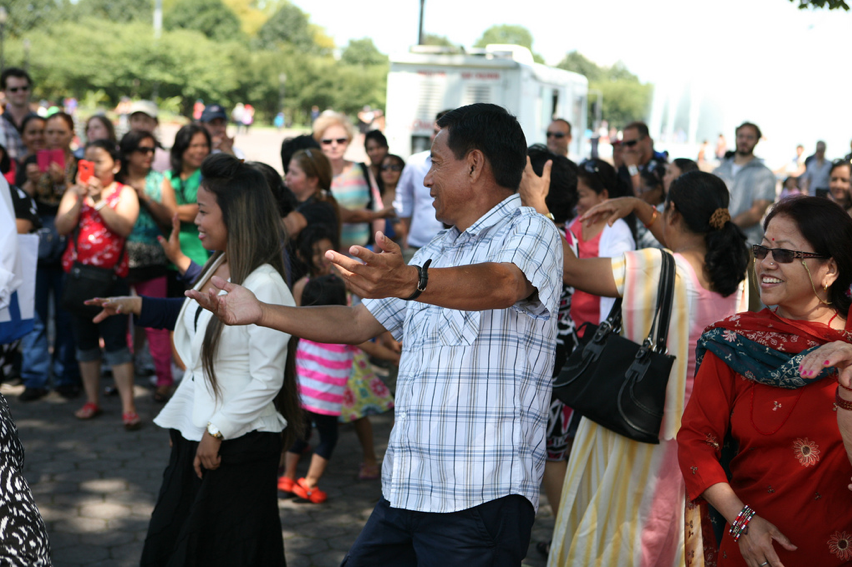 ← Citizens VS. Work - the trial