On the day of our envisioning and harvesting event we met quite a few people that we hadn’t interacted with before in Tigra. Events like this are a great way of starting debate and getting like minded people together. During the course of the day we interacted with Deepak Tanwar a local resident and amateur wrestler. Deepak told us how a few people his age had once considered starting a youth group to work on projects and bring the otherwise divided community together. 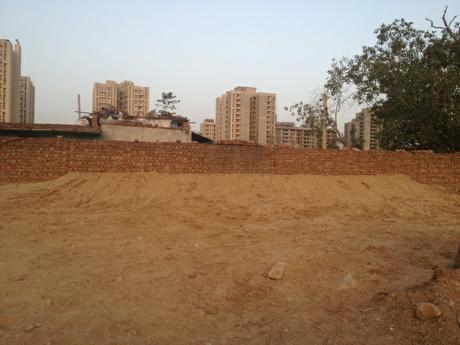 Later that evening we met with Deepak and a few of his friends and had a brief discussion about the dynamics in the village, as well as their frustrations with the lack of mobility and support for community projects. Seeing their enthusiasm we pushed them to consider the idea of creating and individually leading projects, as a way of building momentum.

A week later we met again with Yogesh, Deepak and Tanuj all of whom wanted to build of the initial work we had discussed. The theme of the conversation revolved around what actions they could take to get people excited. And of course what was really feasible. All of the boys threw up potential projects, we collectively weighed out the pros and cons. We asked Deepak if he would be interested in re-starting his original project.

Deepak comes from a family of Wrestlers or Pehlawans. Tigra once had a tradition of Pehlwani, now lost. Being a state level wrestler himself, Deepak has been involved in the sport quite actively at a local level. Earlier this year he had tried to build an Akhada or open wrestling ring, but couldn’t manage to take it forward. Lack of support and conviction being the main reasons. During the brainstorming session he gained a new found enthusiasm for the project. His peers encouragement perhaps being an added impetuous. 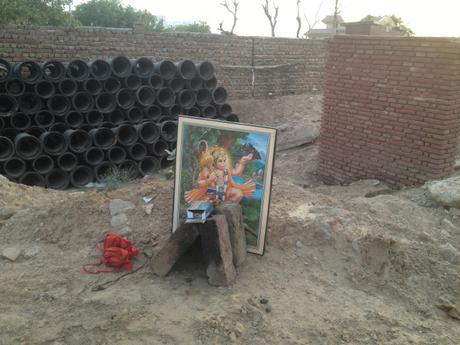 Another week passes, with little communication between our team and new village youth team. Marriages and examinations tend to take rightful priority in Tigra. This past Friday we received an excited call from Yogesh, simply put Deepak and a few other wrestlers had rigged up a basic wrestling ring. The ring was inaugurated by a once wrestler and now local politician followed by a small exhibition bout between reigning champion Deepak and other local wrestlers.

We followed up with Deepak soon after. The Akhada was getting over wheleming support, from free dirt (no ordinary soil, but a special composition for wrestling) to burlap sacks full of almonds for an almond lassi that the trainee’s have to consume on a daily basis. It only took the will of a handful of people and 7 days to make it happen. All they needed was a raised dirt ring, a photo of Hanuman and handful of interested and motivated students. 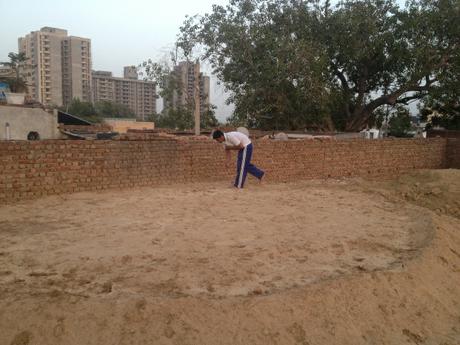 It’s been 9 days since it opened. The Akhada already has 30 students, 6 competitive wrestlers and 3 coaches. And of course head catalyst Deepak. Practice begins at 7pm everyday except Tuesdays, to pay respect to Hanuman patron god of discipline, riot unless and all things ‘manly’. There is a new found excitement in the village. The evenings are electric, with spectators lined up to watch the young men train and compete. And naturally, respect and admiration for there local Pehlwan Deepak.

Deepak tells that the beautiful thing about an Akahda is that it is equalizing. Religion, caste, money have no meaning when you step onto the grounds. Pride, ego and aggression have no place in the wrestlers code. ‘It doesn’t matter to me whether my students are from an upper or lower caste, educated or illiterate, from this village or migrants’, says Deepak. 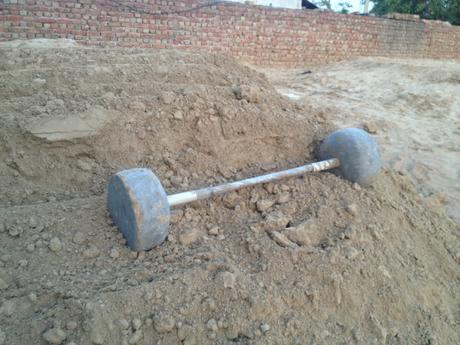 It’s interesting to think that Deepak has occupied a part of the community center, itself a contentious space created on land that was once part of the lake. While the community center has been under construction for 3 years, the Akhada though basic took only a week. ‘Creating this space doesn’t require politics, all it needs is collective will’.

Deepak is quite sure that this will gain more and more momentum and as it does will be a good outlet for local youth. Considering the success rates of similar youth sports programs around the world, things look good for Tigra’s Akhada(Gurgaons 2nd official Akhada). This could very well be a model for other local initiatives.