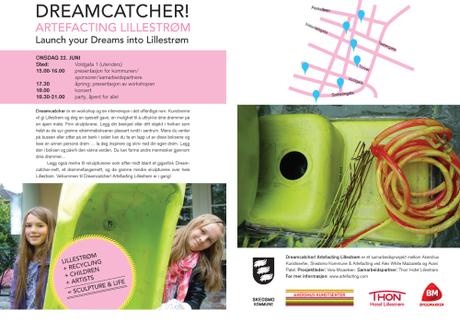 Photos of the sculptures by Alex White Mazzarella

Alas we launch the sculptures and installation into Lillestrom’s public space. Frantically we hauled the pieces around town with the children and rose high in the sky to hang the smaller sculptures and objects in the Dreamcatcher. The children were overly joyous to have their work out in public, and a gracious reception by Rikke and Vera officially welcomed their work into the city. Many thanks to Lillestrom for welcoming us with such open arms.

Photos of the workshop by Kathrine Storm-Olsen & Alex White Mazzarella

Twenty children in office chairs around a long conference table in a Skedsmo Municipality Office. A peculiar but fun way to begin. A short film and photos from other missions was presented, and the children were left wondering and curious about the dreamcatchers they would be making. Before they could think to much we walked down to the Kulture House. We had finished some sculptures also to serve as examples, and before we could really offer too much instruction the kids were sifting through our gathered materials.

Children dived into the Dreambox idea; sculptures that would be able to deliver dreams of sorts, whether it be through serving as a note receptacle, or engaging the viewer in some creative way. On the following day final touches were put on the dreamboxes and smaller sculptures were being assembled to lie in the dreamcatcher. And finally, the painting began, with the bright flourescent green paint buckets depleting slowly. The green would find its way nearly everywhere, with yours truly still sporting the substance all over.

Upon finally coating the sculptures with an effervescent super nature green, the fairytale substance of dreams began to emerge replacing rust and dented metal. A spire resembles a gnome’s hat, a monster bathtub leans over to whisper sound from its’ drainpipe… a bit of magic, and magic is something the Norwegians are more than familiar with. 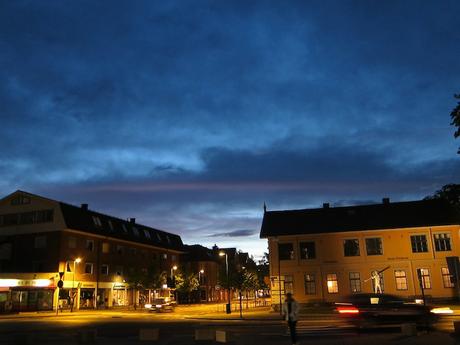 The way to the North - Norway, Norwegen, Norway - has always been regarded as difficult to find, hard to travel and full of unspeakable dangers. For the antique writers, Norway was a land of Folk Tales and Myths. Ultima Thule- “beyond the borders of the known world”- inhabited by savage barbarians and full of strange and fantastic creatures. The Paganism lasted longer up here in the North. While the rest of Europe had been Christianized for nearly a thousand years, we were still worshiping our old pagan Gods. Throughout the centuries, therefore, tradesmen, soldiers and missionaries who ventured up here given many headshaking depictions of us when they were safely home again.

“In the traditional sense, Folklore is a series of old notions of nature mystical spirits and supernatural forces that lived side by side with the official religion, and borrowed, used and reinterpreted elements from it.”
(Ørnulf Hodne) More Norweigan Folklore HERE

Avani, Rikke, Vera, Kristen and I are excited about officially launching the workshop tomorrow, and seeing what type of inspiration and positivity Artefacting can catalyze in this sleepy town. Will the public be inspired by Dreamcatcher Infrastructure, and actually utilize this odd new public space furniture?

Back at the ROAF recycling center, and it really became clear why Norway is one of the Europe’s top recyclers. Nearly everything is segregated in the name of protecting the environment. Avani and I jumped back into the mountains of scrap metal to fish out some large pieces for some sculptures; a car door and bathtub were the top hits… and back in Lillestrøm, while the town was partying late in the name of the solstice, we rounded out the plans for the sculptures and where they will be going.

Amongst meeting center officials the response to our sculptures has been great, with apparently everyone wanting one in front of their building or public space. We’ll have to see about that!

The concept for the Kultusenter Dreambox sculpture, or is it a Door to Time? Photo by Alex White Mazzarella 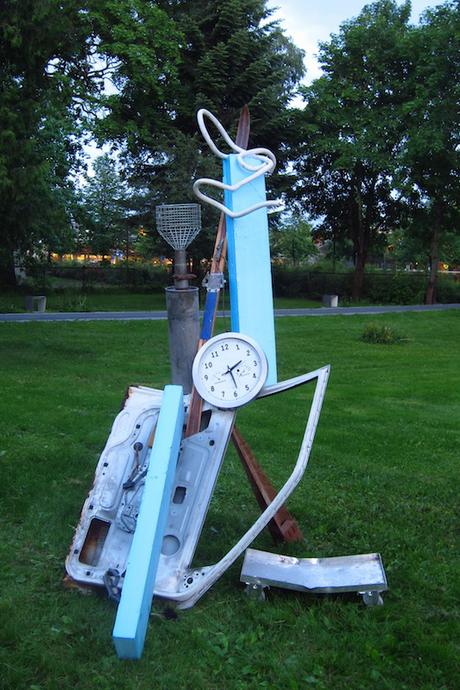 At 9am Avani, Vera and I took a truck and wagon over to ROAF, the regional industrial waste site to begin gathering material for the workshop. A steady rain pelted us, but we sifted through mounds and mounds of industrial waste, identifying and selecting objects for our sculptures that are representative of everyday Lillestrom life. Bicycles, toys, a golf club, a saw, a lawnmower… we packed the wagon with heaps of materials that Vera referred to as “gold”. Funny considering that in Dharavi, the recycling center of Mumbai, waste material was referred to as “the loot”! The idea comes full circle… turning obsolescence into renewed human value. And this time it will be manifested as interactive “dream infrastructure” for the public.

What in the world is “dream infrastructure”? We’ll soon find out! For now heaps of materials are lying in a lawn in the center of Lillestrom waiting to undergo artistic metamorphosis to find their way back into the lives of the people. Stay tuned for more…

Dreamcatcher! On exhibition in Skedsmo municipality →